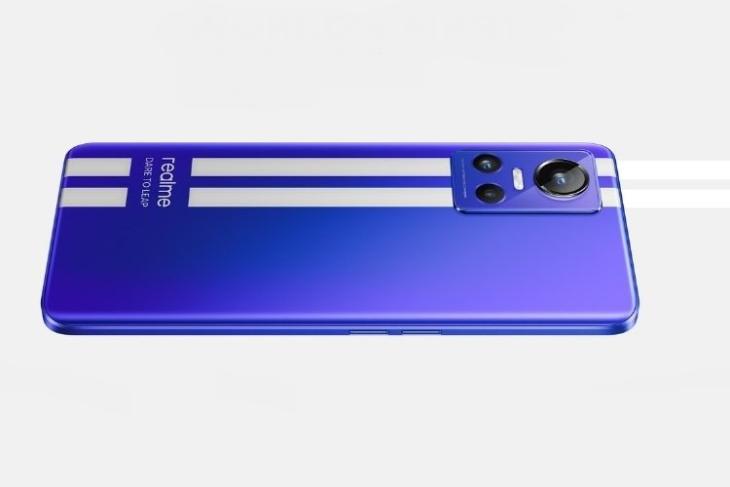 A day after the launch of its supposed rebrand with the OnePlus packaging (in case you couldn’t figure out, the OnePlus 10R), the Realme GT Neo 3 has launched in India today. This phone, which safely takes the title of the world’s first device with 150W fast charging, comes with a MediaTek Dimensity 8100 chipset and more things similar to what we saw yesterday. Here’s a look at the details.

It will go on sale starting May 4 via Flipkart, the company’s website, and leading retail stores. As part of Realme’s anniversary, the device will be available at a discount of Rs 7,000 on SBI and ICICI Bank cards.

Realme GT Neo 3: A Look at the Specs

The Realme GT Neo 3 has already made a debut in China, so its specs sheet is not a secret. In India, it features the same race track-inspired vertical stripes and a rectangular camera hump with the cameras placed in a triangle pattern. The back panel has a matte AG Glass coating. This design comes in Nitro Blue and Sprint White colors. There’s also an Asphalt Black color sans the stripes. Unlike the OnePlus 10R, the GT Neo 3 doesn’t opt for flat edges, which is another way to differentiate between the two identical phones.

Upfront, you have a big enough 6.7-inch Full HD+ AMOLED display with a 120Hz refresh rate, HDR10+, 1.07 billion colors, and DC Dimming. The GT Neo 3 comes with a dedicated display processor for lag-free gaming and lower power consumption. It is powered by the currently popular MediaTek Dimensity 8100 chipset, paired with 12GB of RAM and 256GB of storage.

This phone is also the carrier of the 50MP camera trend and hence, the main camera is rated at 50MP with a Sony IMX766 sensor and OIS. This is placed with an 8MP ultra-wide lens and a 2MP tele-macro camera. There is a 16MP front camera at your disposal. The device comes with improved night mode, Street photography mode,

The battery department is the key highlight, coming with a fast-charging chip and that is how you get two variants. There’s one with a dual-cell 4,500mAh battery and support for 150W UltraDart fast charging that can reach a 50% charge in just 5 minutes. Then, there’s the other variant that is backed by a 5,000mAh battery and 80WSuperDart fast charging. It can reach 50% in just 12 minutes. The device runs Realme UI 3.0 based on Android 12.

There are a few gaming-centric features as well such as the GT mode 3.0 and 9-layer stainless steel VC liquid cooling system to lower the temperature by 19 degrees. The GT Neo 3 also supports HyperSmart antenna switching technology, Smart Network Enhancer, an X-linear motor, 360-degree NFC, and more.