The Poco F1 by Xiaomi is an assassin clad in the naivety of a new brand when it comes to performance. Powered by Snapdragon 845, it packs in a great spirit of resilience against power-hungry tasks, especially games. But the Poco F1 also features a great camera, and the effect becomes more pronounced when we look at the price of the smartphone.

I’ve been testing the camera on the Poco F1 (starts at Rs 20,990 on Flipkart) extensively and have been no less than blown away by the quality of the shots it produces. From a wider perspective, these shots are highly detailed and the colors are close to natural. The AI, which has been improved over the one present on Mi 8 and Mi MIX 2S, too adds a flavor of vibrancy and liveliness to the pictures. 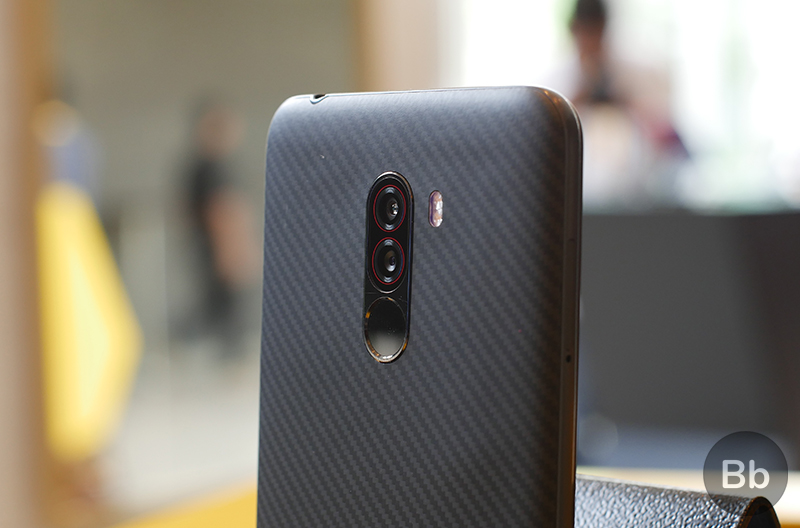 After taking the Poco F1 out for a spin around parts of Delhi, following are some of the pictures I’ve captured using the device. Here’s how well the camera performed during my test.

The Poco F1 comes with a dual camera setup on the back. It borrows the same 12-megapixel primary sensor which is available on the Mi 8 and the Mi MIX 2S. The sensor has an aperture of f/1.9 and captures images at a pixel size of 1.4μm. The primary sensor is complemented by a 5-megapixel sensor with an aperture of f/2.0 and a pixel size of 1.12μm. The secondary sensor is primarily used to induce a portrait or bokeh effect in the images. The rear camera is capable of 4K video at 30fps and slo-mo videos at up to 240fps in a 1080p resolution. 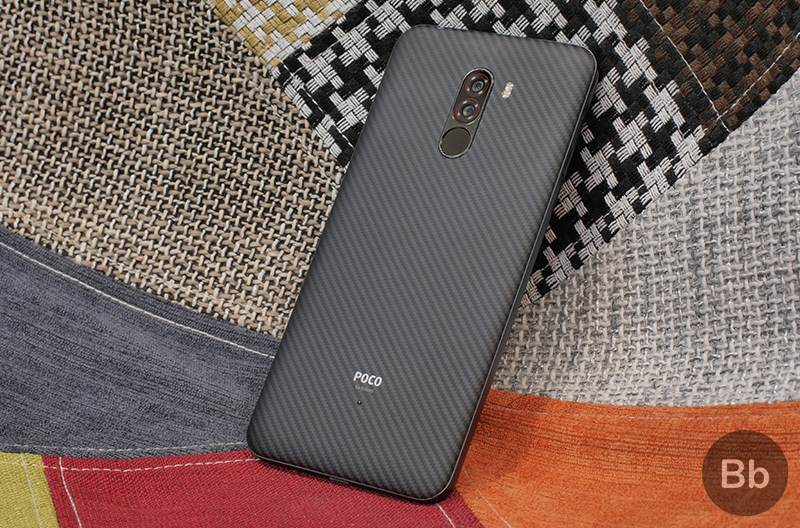 The front camera is made up of a 20-megapixel sensor which with a 0.9μm pixel size and f/2.0 aperture. The front camera can record up to 1080p videos at 30fps and can also capture portrait selfies.

Besides the standard modes, there’s also a manual mode in the Poco F1 camera app which lets you control the shutter speed, ISO, as well as focus manually. There’s also an option to change the white balance. The various modes are enhanced by AI which improves the contrast and color of the images by identifying up to 25 objects and more than 200 different scenes and while I haven’t discovered all 200, I’m taking Xiaomi’s word on it.

Leveraging Xiaomi’s super cost-effective supply chain, Poco F1’s camera gets the rich performance of the Mi 8’s primary sensor at nearly half its cost. The camera captures an impressive amount of detail and that holds true for almost all lighting conditions. Most of these shots have been captured in the default mode with AI turned on – as it is by default.

The camera on this smartphone deserves a bow when it comes to the clarity. In bright lighting conditions, the details are well preserved and there’s a striking balance of sharpness and color.

Here are some examples of the image capturing abilities of the Poco F1.

Poco F1’s virtue of maintaining a good amount of detail holds true even in low light. However, noise in terms of colors starts to creep with a decrease in the amount of light. Still, most of these images are good enough to be used on social media without any filters. If in case, you do want filters, Poco F1’s camera app, which is the same as other MIUI smartphones, brings a variety of inbuilt filters.

I’ve to admit that the AI feature in the Poco F1’s camera sometimes oversaturates images, especially when the frame is dominated by a single color. Take a look at these shots.

Portrait mode, or “bokeh” as is the lingo popularized by the iPhone, has become another benchmark of camera performance since Apple took the route of dual cameras. The Poco F1 performs really well in this department with accurate blurring of the background and smart edge detection.

The details tend to hold up in low light but blurring is something that it might not do very well in low light, but there good lighting to make up for it.

The front camera, too, is ingenious in terms of managing lighting and details, and produces some stunning shots. Adding to this is the portrait mode for selfies which greatly improves the overall tone. Unlike any other brand’s smartphone, the Poco F1 can selectively blur background if more than one person is present in the background and it does this with a sense of elegance.

Of course, this would look gimmicky to anyone versed with DSLR photography but it’s a nifty feature when it comes to smartphone selfies mostly meant for Instagram.

The rear camera on the Poco F1 is capable of capturing up to 4K video at 30fps and slo-mo at up to 240fps with a resolution of 1080p. The stability of the video could be better had there been optical image stabilization (OIS), but hey(!) we’re talking about a Rs 20,990 phone, and for the price, the quality is great. As you would have guessed, there electronic image stabilization (EIS). Constantly shooting at 4K does heat the phone up a bit but the liquid cooling system inside the Poco F1 takes care of it.

Take a look at the quality of the video.

I thought it wouldn’t be fair to rest upon the Poco F1’s laurels in terms of photography. Hence was made the decision to compare the Poco F1’s cameras with those on other devices. The devices we chose for this comparison include Mi A2, Honor Play, Nokia 7 Plus because these are the Pocophone’s major competitors. We also planned to include the OnePlus 6 out of sheer favoritism and this is how these devices performed. 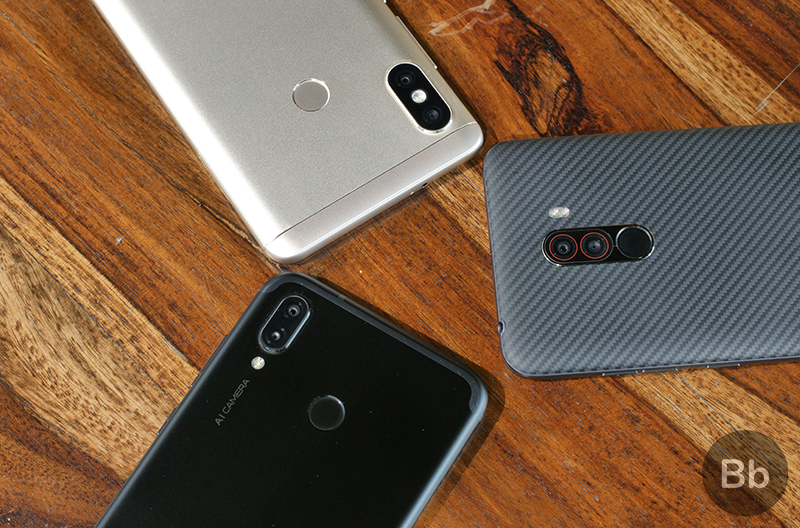 Indoors, the Poco F1 overpowers other smartphones in terms of the colors and the sharpness of images it captures with the OnePlus 6 being its closest competitor. The Honor Play comes close when it comes to the amount of detail but falls slightly short. I should also blame it for oversaturating the images and over smoothening faces.

The Mi A2 follows these with slightly less clarity while the Nokia 7 Plus comes last with least details indoors. However, it does a commendable job in terms of maintaining the colors.

Outdoors, the Poco F1, OnePlus 6, and Honor Play do exceedingly well in terms of capturing details and OnePlus 6 captures the colors with maximum accuracy. Both Poco F1 and Honor Play take the liberty of overdoing colors, especially greens – thanks to the AI.

Next, when it comes to portrait shots, I think again a tough battle between the OnePlus 6, Honor Play, and Poco F1. Here, the Poco F1 aces at capturing the edges but it smoothens skin, making the results look surreal but also unreal. The Mi A2 comes at the fourth position in this contest while the Nokia 7 Plus disqualifies as the portrait mode didn’t work on our unit running the Android P DP3.

Coming to selfies, the trend so forth has remained consistent. The selfies shot using OnePlus 6 and Honor Play turn out to be the most accurate with the former adding a slight blur to the image’s background even when the portrait mode is not turned on. Poco F1 captures more details than these two smartphones but the amount of smoothening might peeve some people looking for realistic images.

Both the Mi A2 and the Nokia 7 Plus overexpose selfies which causes an artificial whitening of the face, straying away from the actual colors in the images.

Lastly, in the case of selfie portraits, I firmly believe that the Poco F1 is a clearcut winner and I say this because of the F1’s ability to capture depth with great accuracy. OnePlus 6 and Honor Play come close but falter due to improper edge detection while the effect on Mi A2 and Nokia 7 Plus appears to be somewhat gimmicky and not impressive in any form.

The camera performance on the Poco F1 is exceptional as we can see in most of the cases illustrated above. It brings an unbeatable blend of clarity and great color to the table which abashes not just the Honor Play but also OnePlus 6 which cost nearly twice as much. Other phones do not come anywhere close and this makes me feel that Poco F1 is overall, the most powerful camera smartphone out of the bunch.

I’m just feeling a bit harassed by the AI, especially when a single color dominates the canvas and hope Xiaomi tones that down in future – or at least adds an option to do so. But most of the times, the AI enriches the quality and makes images feel inviting and agreeable.

If we consider the price, the camera is definitely the best in the range and with a few improvements, could change the dynamics of smartphone photography.