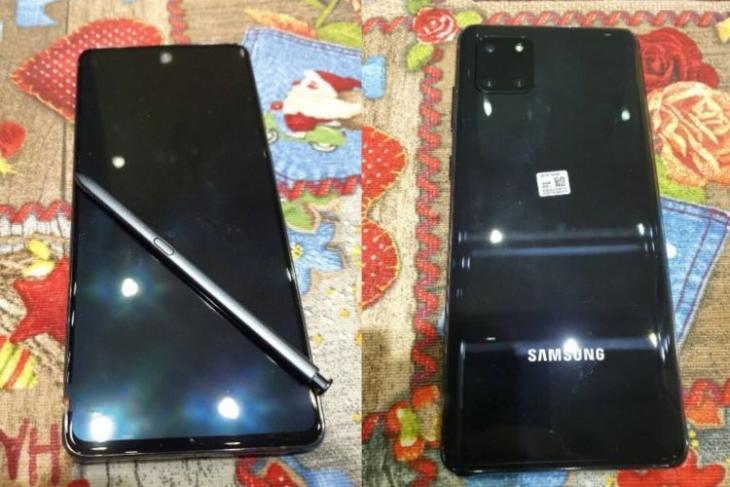 Samsung Galaxy Note 10 Lite is rumored to arrive at CES 2020 next week, along with the much-rumored Galaxy S10 Lite. We have already seen a plethora of leaks for this smartphone – be it the complete specs sheet or official renders. But, mere days before the Galaxy Note 10 Lite goes official, we have got a first look at the device, thanks to a set of leaked real-life images.

The image attached above (via TechTalk TV) confirms that Galaxy Note 10 Lite is a go. It’s launching soon. And not only that, but it also confirms the myriad of design leaks over the past couple of months. The device will boast a fullscreen bezel-less flat display (unlike the Galaxy Note 10’s dual-curved screen) with a centered punch-hole design. It resembles the Galaxy A51 that launched recently in Vietnam.

The leaked images also give us a close look at the much-rumored massive square camera bump with three lenses and an LED flash – all aligned perfectly, one on each edge. There’s an S-pen in tow as well else it won’t really be a Galaxy Note device. And the rear panel, it looks like, won’t be glass like the flagship Note 10 and will instead be a glasstic panel like the mid-range Samsung Galaxy A-series phones.

The image above gives you a closer look at the front display panel. It not only confirms that the device is indeed the Galaxy Note 10 Lite (model number SM-N770F/DS), but is also showing off the punch-hole selfie camera in all its glory.

Recent leaks have suggested that the Galaxy Note 10 Lite will be priced at €609 (around $675, Rs. 48,000) and it’s difficult to determine why Samsung is adding a Lite variant to the flagship Note lineup this late. We are already seeing leaks for the Galaxy S11 (or the Galaxy S20, as it might be called) that launches in February next month with the newest Snapdragon 865 5G chipset instead of a two-year-old 10nm chipset.