Skip to content
Home News Samsung Galaxy A51, Galaxy A71 with Infinity-O Display and Quad-Cameras Launched 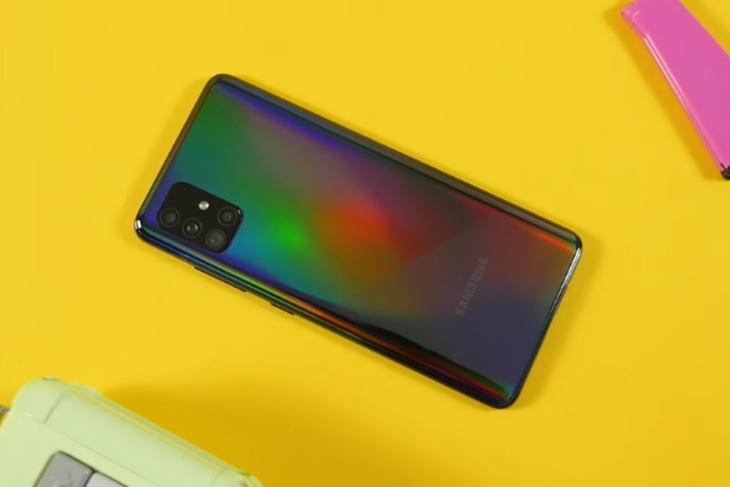 Samsung continues to expand the Galaxy A-series, which has helped it regain some lost market share in the mid-range segment. The Korean giant has today officially taken the wraps off the Galaxy A51 and Galaxy A71 at a launch event in Vietnam. They debut as a successor to Galaxy A50s and Galaxy A70 respectively, but with some useful upgrades in tow.

Galaxy A51: Specs and Features

The Galaxy A51 sports a 6.5-inch Full-HD+ Infinity-O Super AMOLED display with a 20:9 aspect ratio, 2400 x 1080 pixels resolution, and 87.4% screen-to-body ratio. You’re going to find a centered punch-hole up-top and an in-display fingerprint sensor sitting at the bottom.

Under the hood, Galaxy A51 is powered by the same Exynos 9611 chipset that we find on the Galaxy A50 as well. It’s coupled with 6GB RAM and 128GB storage, which can be expanded up to 1TB via the dedicated microSD card slot onboard.

In the camera department, Samsung has added a dedicated macro lens to the triple camera setup on the Galaxy A50s. It’s now an L-shaped quad-camera setup sitting inside that rectangular bump you see above. You now have a 48MP (f/2.0) primary camera, paired with a 12MP ultra-wide-angle with 123-degree FOV, a 5MP macro lens, and a 5MP depth sensor. There’s a 32MP (f/2.2) selfie snapper housed inside the center punch-hole.

Galaxy A51 comes integrated with a 4,000 mAh battery with 15W super-fast charging technology support. It is the first Samsung phone to debut with OneUI 2.0, based on Android 10, out-of-the-box.

Galaxy A71: Specs and Features

Galaxy A71 was also launched alongside the Galaxy A51 today. It boasts the exact same design – both on the front and back, but with a slight bump in performance. Galaxy A71 comes backed by the gaming-centric Snapdragon 730 chipset, paired with up to 8GB of RAM and 128GB of storage. It also includes a bigger 4,500 mAh battery and faster 25W charging support.

Samsung has placed a crucial focus on the camera here as well. Galaxy A71 bumps the 48MP sensor on the Galaxy A51 up to the company’s 64MP (f/1.8) sensor. Every other sensor including the ultra-wide, macro, depth, and even the selfie camera remains the same as the Galaxy A51.

Galaxy A51 comes in a single 6GB+128GB variant, which has been priced at 7,990,000 VND (around Rs. 24,450). The device comes in four attractive colors namely Prism Crush Black, White, Blue, and Pink. It will up for pre-order starting December 16 next week and will go on sale from December 27.

Samsung is yet to announce the price and availability details for the Galaxy A71. but it’s going to be made available in four colors namely Prism Crush Black, Silver, Blue and Pink. Judging by the success of the Galaxy A50 in India, we can expect Samsung to launch the Galaxy A51 in the country really soon. Excited to check out another Galaxy A50 upgrade within a couple of months?