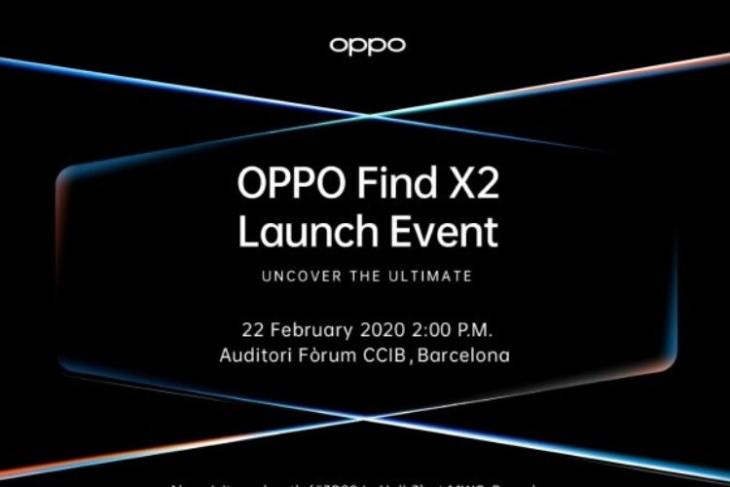 I briefly got to check out the Oppo Find X concept when it launched in India back in 2018. That was about a year and a half ago, but I was pretty impressed by its uniform design and mechanical pop-up camera design. Well, we did get the new Reno flagship series last year but Oppo is now ready to show off another Find series smartphone.

As revealed by the media invite, Oppo Find X2 will be launched on February 22 ahead of MWC 2020 in Barcelona. The invite does not include hints as to what the device will look like or features it will bring. Leaks about the Find X2 too are scarce but we did hear that the device will sport a 120Hz WQHD (1440p) AMOLED display – same as the much-rumored OnePlus 8 Pro – complete with a punch-hole design. Here’s a look at the leaked screen cover-plate right here:

Oppo Find X recently passed the NBTC certification but none of its internal specifications made an appearance online. We, however, did learn about the existence of a Find X2 Pro variant from its NBTC listing. It powered by the Snapdragon 865 chipset to bear the badge of being a flagship smartphone. You can expect up to 12GB of RAM and 512GB of storage onboard.

In the camera department, we recently learned that Find X2 will come equipped with a custom Sony sensor. It will utilize the 2×2 On-Chip Lens technology that the company announced last year, with faster auto-focus and sharper image capture support. There’s currently no information on the other camera sensors but we can expect teasers to start pouring in next week.

We will also see the 65W SuperVOOC fast-charging technology baked into the Oppo Find X2. It was first seen on the Reno Ace that launched last year and can charge your phone in under 35 minutes. The Oppo Find X was an impressive device so the bar for the successor to this concept phone is set high. So, let’s wait and see what Oppo has in store for us.