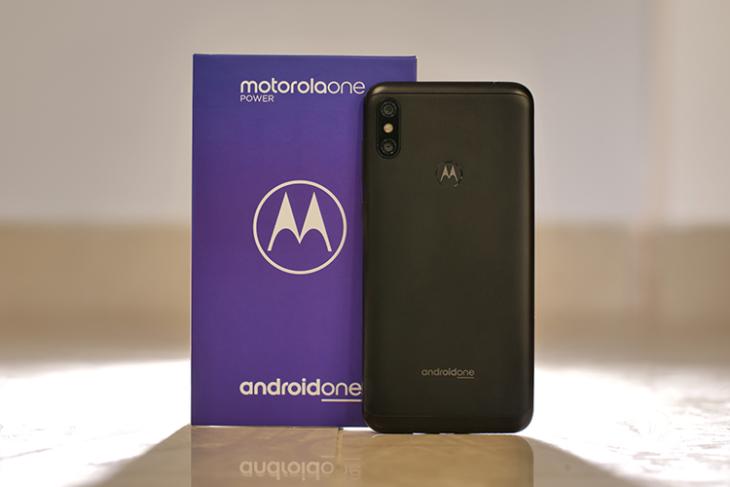 The euphoria of Motorola’s mega success with the Moto G in India drowned soon after Xiaomi and Honor entered the market with compelling phones at surprising prices. The market has since been dominated largely by Xiaomi, with Honor, Oppo and Vivo also getting their fair share of the mid-range market. Motorola is trying to change that again with a new and aggressive vision and a promising device, the Motorola One Power, priced at Rs 15,999.

While the Motorola One Power is equipped with the essential features that make it a compelling mid-range device, its selling point is the mighty 5,000mAh battery. Moreover, by boarding the Android One train, Motorola is vying to outpace companies like Nokia and Xiaomi which have also introduced powerful mid-rangers in the segment such as the Nokia 6.1 Plus and Xiaomi Mi A2, respectively. 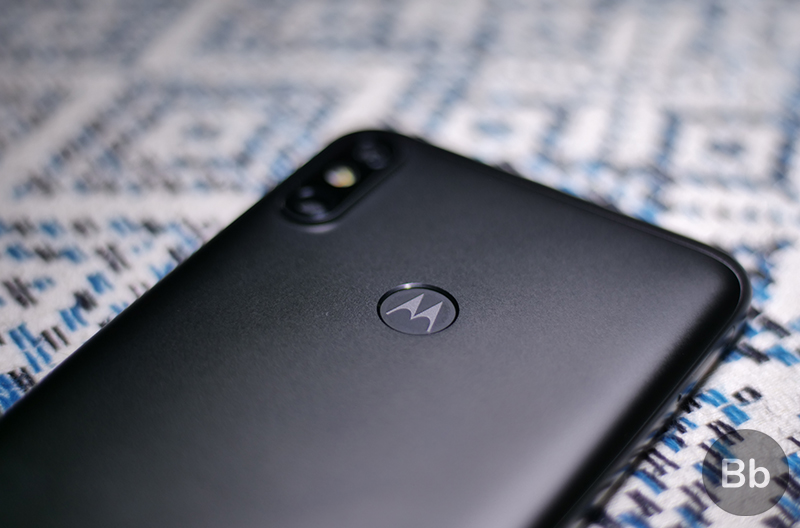 We were able to spend some time with Motorola One Power and while our review is still in the works, the phone seems to be a promising and interesting proposition. This is what I’ve come to think of the smartphone after using it for a short duration.

From the very moment that I picked up the Motorola One Power in my hands, I could not help but admire the simple yet seemingly durable build quality. However, the sturdiness and the large battery result in a bloated look and heavy phone, which is a lot more than what we see usually. 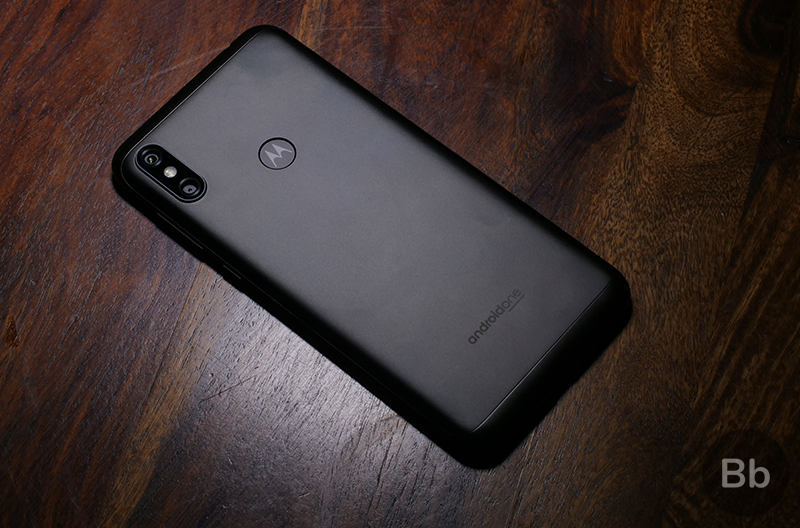 With that said, I also feel that the weight should not be a very disappointing aspect because of the curved edges of the glass which make holding the Motorola One Power a convenient affair. This shows that Motorola has paid attention to minute details in order to improve the long-term usability of the One Power. 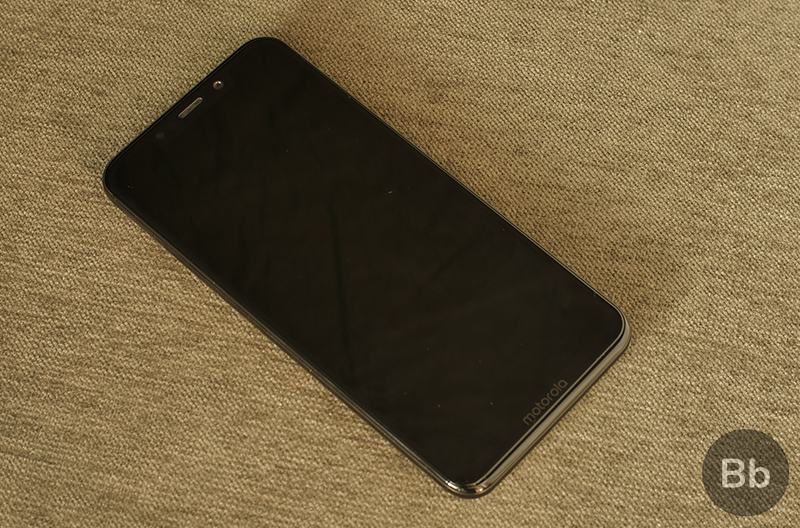 At the bottom, there’s a single speaker along with the USB-C port while the top houses noise cancellation mic and a headphone jack. The fingerprint sensor underneath the Moto logo is placed along the center line on the back of the smartphone, neighboring the 16MP+5MP dual camera setup with the dual-tone LED flash caught up in between the sensors. The rear camera unmistakably reminds you of the iPhone’s design but that’s something that almost all brands have aped, making it a trend, so we can hardly complain.

Moto One Power comes with dual SIM+micro SD non-hybrid slot on the left side of the device to expand the inbuilt storage, which is something interesting and not easily seen on mid-rangers. The volume rocker and the power buttons are located on the right side. These buttons have a very short travel and feel clumsy, forcing you to press too hard (even though they’re not stiff). 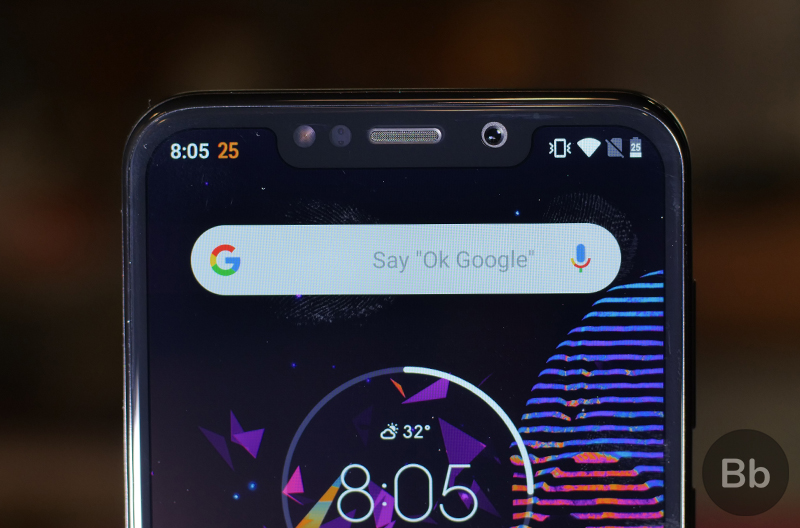 With this launch, Motorola is now enrolled into the cult of notched displays on mid-range smartphones. Motorola One Power gets a 6.2-inch IPS display with super curved corners, which reminds me of the Poco F1. Below the display, there’s a Motorola logo and nothing else.

As mentioned previously, the Motorola One Power is equipped with a 6.2-inch IPS LCD display which sports a resolution of 1080×2246 pixels. The display is decent to look at and has a good contrast. There is a blueish tint on the screen and we’ll see in the review if this can be optimized using display settings.

The panel looks very similar to the Poco F1, and is larger than the Mi A2 as well as Nokia 6.1 Plus. Motorola hopes that this large and curved display will entice Indian buyers.

The Motorola One Power is equipped with a 16MP+5MP camera setup on the back with the secondary sensor being used for depth sensing in the portrait mode. It looks like Motorola is using the stock AOSP camera app with no major customization. At the same time, a Google Lens shortcut is built into the camera app that allows you to point the camera at an object and learn more about it.

On the front of the Motorola One Power, there’s a 12MP camera for selfies which also supports the background blur aka “bokeh” effect. The front camera interface also gets a basic beautification mode and to illuminate selfies, there’s a front-facing flash on the camera. Unlike other selfie flashes, which basically act as a torch, this one actually works like a traditional a flash with sequential flares. 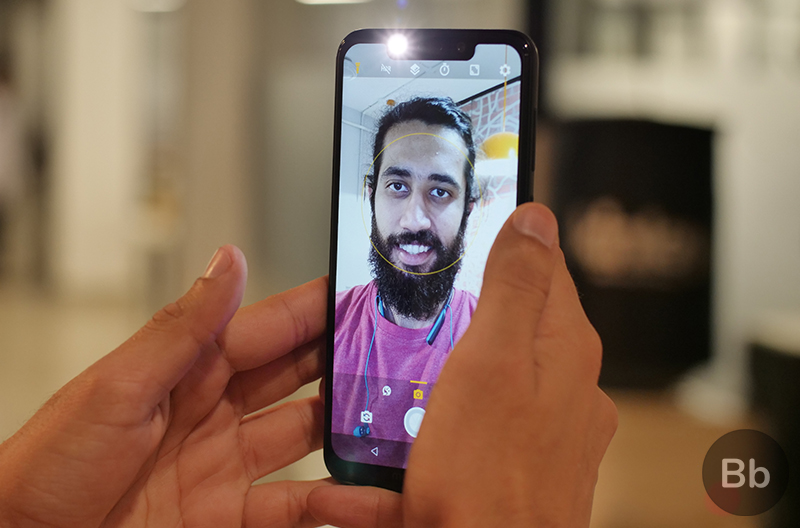 In terms of the quality of images, I found the bright light shots to be sharp – although the color seemed a bit oversaturated. Selfies have ample amount of detail but from its initial performance, the bokeh shots were not very appealing and it looked like Motorola needs to work a little more trying to resolve these issues.

Here’s a mixed bag of some shots that I took using the Motorola One Power at its launch:

At the heart of the Motorola One Power is a Snapdragon 636 chipset paired with 4GB of RAM. Motorola is not launching variant with more RAM, possibly to keep its inventory lean. This is a tried and tested combination and we do expect it to fare well in terms of performance. However, that is something be able to sure of only after extensive testing.

A key feature – and what is also behind the smartphone’s name – is the powerful battery it packs in. The Motorola One Power has a big 5,000mAh battery and at the presentation, the company claimed that it can last for a full two-day-long cycle. Refilling it also takes merely two hours. So all in all this aspect makes the One Power one of the desirable devices for entertainment.

The Motorola One Power is part of the Android One program and comes with Android Oreo with minimal customization over stock Android, and that includes Moto actions and Moto display. With Android One comes the guarantee of timely updates including incremental updates to Android Pie by the end of this year and update to Android Q next year.

The device will also receive Google’s security updates for the next three years i.e. until September 2021. With Android One, the device also gets the benefit of unlimited storage on Google Photos. Interestingly, the device also gets support for HD playback on Netflix and other on-demand video apps through a Widevine L1 license.

The Motorola One Power has been launched at the price of Rs 15,999 in India and looking at the specifications, especially the camera, I find the pricing intriguing. The smartphone will be available starting the noon of October 5 exclusively via Flipkart.

At this price, its prime competitors include Xiaomi Mi A2 and Nokia 6.1 Plus, but the huge battery also makes it a worthy competitor for the Asus Zenfone Max Pro M1. We’ll be looking at these comparisons in the coming days, so stay tuned.