App Library, along with Home screen widgets and the cool back tap feature, is probably the biggest highlight of iOS 14. The best part about this all-new feature is the ability to automatically organize apps into different categories like social, entertainment, and creativity for quick access. When you download new apps, they not only appear on the home screen but also in the App Library (in the recently added section). However, you can choose to directly download new apps into App Library in iOS 14, if you don’t like to clutter the home screen with a ton of apps.

Personally, I prefer to keep the home screen clean by either hiding apps or putting them into different folders. With iOS 14 offering a pretty straightforward way to organize apps, I no longer need to create app folders.

As App Library also offers quick access to apps, there is no point in showing them on the home screen. It’s a quite simple yet effective way to prevent the home screen from being messed up. Let me show you this little nifty feature works!

1. Launch the Settings app on your iPhone.

3. Under the New App Downloads section, choose App Library Only. 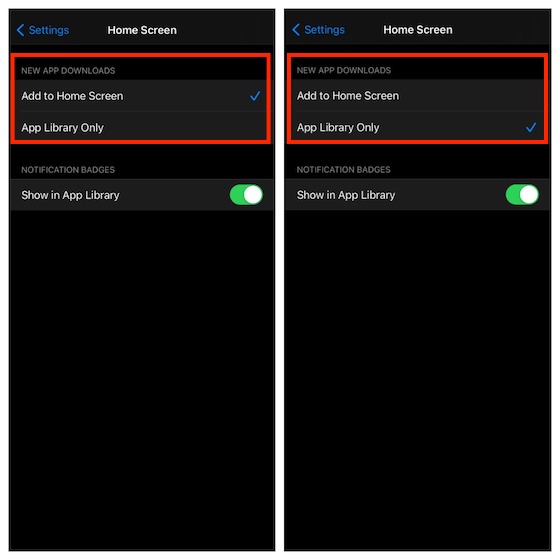 That’s pretty much it! Going forward, new apps will be automatically downloaded to App Library on your iOS 14 device. If you ever want to change this behavior, follow the same steps, and then choose the Add to Home Screen option in the end.

Use App Library to Keep the Home Screen Clean

So, that’s the way you can use Apple Library to keep the home screen of your device uncluttered. While it may seem to be a tiny feature, I find it quite helpful. And if you also prefer to have a clean looking home screen, you may appreciate it as well.

After rigorous beta testing, iOS 14 is set to be officially rolled out next month. Aside from being feature-rich, the latest iteration of iOS has also enhanced privacy by introducing a series of privacy-centric features like the ability to disable tracking, restricting apps’ access to the local networks, and even stopping apps from having access to the precise location.

If you are running iOS 14 beta, let us know how it’s going for you. If not, are you excited? Let us know in the comments below.

How to Show Notification Badges in App Library in iOS 14