Skip to content
Home News Apple Watch Will No Longer Bundle a Power Adapter in the Box…Is the iPhone 12 Next? 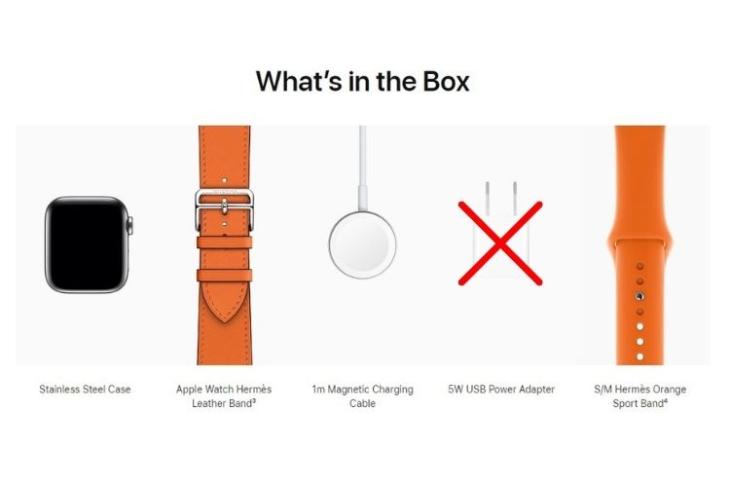 At its ‘Time Flies’ virtual event, we saw the Apple Watch Series 6 and Apple Watch SE make their much-awaited debut. While the former features blood oxygen monitoring and the new S6 chip, the latter is a slightly affordable mass-market offering. They both may not boast the exact feature set, but there’s one thing that will be common between the two. Neither of the new Apple Watches will include a power adapter in the box.

Yeah, you heard that right. The company will no lo bundle the traditional 5W power adapter with the Apple Watch. You will only get the magnetic charging cable that you can simply plug into an existing adapter or your PC’s USB port to charge your Apple Watch. Why has Apple decided to not offer a simple thing as a power adapter in the box?

The company justifies its move of removing the power adapter from the Apple Watch box by saying that it will enable them to meet their environmental sustainability goals. Apple strives to be carbon-free by 2030 and this is one of the measures it has taken to ensure that its carbon footprint goes down on the manufacturing front.

This decision from Apple is enough to further fuel the fire that the iPhone 12 lineup will also not provide a power adapter within the box. There have recently been rumors that Apple is planning to not bundle accessories, both the adapter and earbuds, in the box. Well, the rumored reasons align with Apple’s reasoning it announced at the event. The lightning adapter is already available with most Apple users and the new charger will only further add to the clutter and environmental waste.

There it is: Apple removing USB power adapters from Apple Watch. Next month: iPhone.

The Cupertino giant is not wrong in thinking the same as the power adapter is surely a ubiquitous accessory for Apple users. Most of them will have a slow-running 5W power adapter while some may have upgraded to the 18W USB‑C power adapter. But, it most likely seems like the basic iPhone 12 variants won’t bundle a power adapter in the box. You can, of course, spend $19 for the 5W adapter and $29 for the 18W adapter. There’s also rumors of a 20W fast-charger being in the works as well.

This will, however, lead to joke and insults being thrown at Apple as the company now seems to be ‘building a trillion-dollar empire‘ on the back of accessory sales. It will be interesting to see the consumer reaction when Apple announces the removal of power adapters from the iPhone 12 series box – just like Apple Watch.