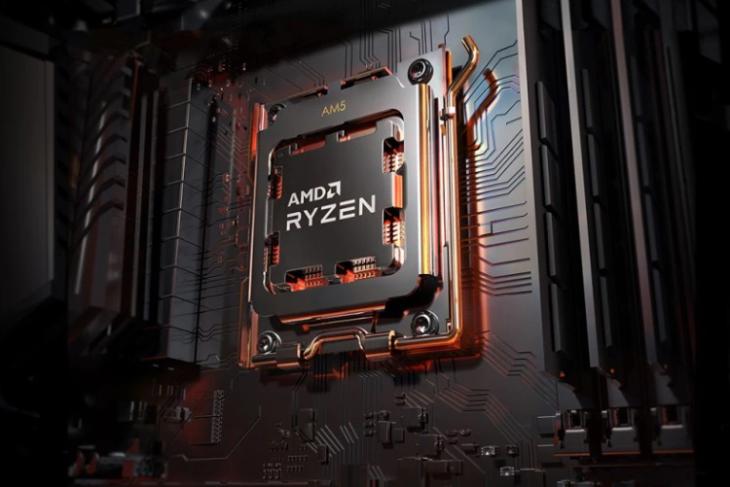 AMD has finally revealed their new Ryzen 7000 series processors based on the Zen 4 architecture that gamers and power-users have been waiting for all year. As we expected, this reveal has shown us that this year’s processors are a complete overhaul, as they use the brand new AM5 Socket. This change is set to bring not only enormous performance and efficiency improvements, but also cutting edge connectivity features like support for new DDR5 memory and PCIe 5.0 technology.

The new Ryzen 7000 processor lineup that was unveiled currently consists of four processors and is all set to go on sale starting from 27th September. Starting at the top-end, we have the Ryzen 9 7950X which retails for $699, and comes with a 16 core/32 threads configuration at a very-high clock speed of 5.7 GHz.

The new Ryzen 7000 series CPUs are also based on a brand new 5nm process technology, which makes them the first mainstream desktop chip to be manufactured on this process node. This AMD has claimed to have led to an impressive gen-on-gen performance upgrade of up to 48% in certain benchmarks and 13% improvements when it comes to instructions-per-clock (IPC).

Furthermore, going to a smaller process node has also allowed AMD to push clock speeds up to 5.7 GHz, which is 800 MHz more than they were able to in their Zen 3 chips (4.9 GHz).

AMD’s path-breaking CEO Lisa Su also presented a few game benchmarks at the press conference, and on first impressions, they seemed quite impressive. While the selection of titles was limited, AMD showed that in games like Shadow of the Tomb Raider, the AMD Ryzen 9 7950X offered improvements of up to 35% over their previous flagship 5950X.

The more interesting comparison, however, were AMD’s claims for the gaming performance of their Ryzen 5 7600X CPU. Using gameplay benchmarks from games like F1 2022, AMD claimed that their 300$ mid-range Ryzen 5 7600X processor was 5% faster than the Core i9 12900K on average when using the same memory configuration.

As with all vendor-provided benchmarks, you should take the above results with a grain of salt. But if the real world performance is even close to this, it will be a very impressive feat as the i9 12900K is the fastest gaming CPU on the planet right now that retails at $600.

The other remarkable aspect to Zen 4 appears to be productivity and efficiency performance. AMD is showing gains up to 48% across a range of rendering workloads like V-Ray and Corona when comparing the 16-core 7950X to last year’s 16-core 5950X. This is particularly impressive because the number of core counts hasn’t changed at all, meaning the increase is mostly achieved via core frequency increase along with the additional IPC increase (13%),

In V-Ray, AMD showed the 7950X demolishing the Core i9-12900K by up to 57%, which will give AMD Ryzen 7000 CPUs heaps of performance buffers against 13th-Gen parts coming soon if these performance claims are accurate across more workloads.

Usually such gen-on-gen improvements are a result of higher core clocks that come at the sacrifice of power consumption, but in Ryzen 7000 series CPUs, this isn’t the case. AMD, for one, is claiming a 47% performance per watt advantage over the 12th-Gen Intel Core i9-12900K, suggesting that it will consume far less power than the Intel processors. This means that the 170W TDP of the 7950X, while higher than the previous-gen 5950X, is more efficient. This means we’re getting a much larger rise in performance over the previous generation.

AMD Socket AM5 Motherboards and Chipsets

At the event, AMD also gave viewers a look at their new socket AM5 platform, which will finally gives AMD processors support for DDR5 memory and PCI-E gen 5. They stated that the platform will at the top-end include a maximum of 24 PCIE 5.0 lanes and memory speeds up to DDR5-6400. AMD also emphasized on the fact that theyare on board with the AM5 platform for the long-haul, as they plan to support it till 2025 at the least.

AMD announced that the new Socket AM5 motherboard family will four new chipsets, giving users the power and flexibility to choose the exact features they want. The X670 and X670E chipsets will be available at launch, while the newly revealed B650E and B650 will arrive a little bit later in October.

In terms of feature disparity, B650E motherboards will provide PCIe 5.0 to both the M.2 and GPU slots, while the standard B650 will only have 5.0 support on the M.2 slot, and PCIe 4.0 everywhere else. The Extreme, on the other hand, will have additional PCIe 5.0 lane support for graphics and storage versus the non-Extreme models, as well as just being the best boards with the most features.

Pricing wise not much has been revealed except the fact that, entry-level motherboards are expected to start at $125, which is a bit more expensive if you compare it to the previous-gen hardware. And this is what we feel is different this generation for AMD – the pricing. Not only have the platforms become a bit more expensive (both CPUs and motherboards), the fact that the new processors require DDR5 only adds to the total up-front cost. DDR5 is still more expensive than DDR4 memory at the moment. A 32GB DDR5-5600 RAM kit from any reputed manufacturer will set you back about $170 these days, compared to $100 for DDR4-3600.

With the announcement of the new AM5 platform and Ryzen 7000 CPUs, we are finally in the next phase of AMD’s breathtaking recovery story. The new processors are set to give Intel’s next gen 13th gen processors a run for there money, and on paper look to take AMD to the next level in terms of performance and power efficiency. Furthermore, the fact that AMD plans to support AM5 socket till 2025 means that the platform will be a safe investment for people looking to buy a new computer in the long run. However, this feeling should be tempered in the short run as the AM5 platform will still be a expensive upgrade, so it might just be a bit out of reach for a regular buyer.