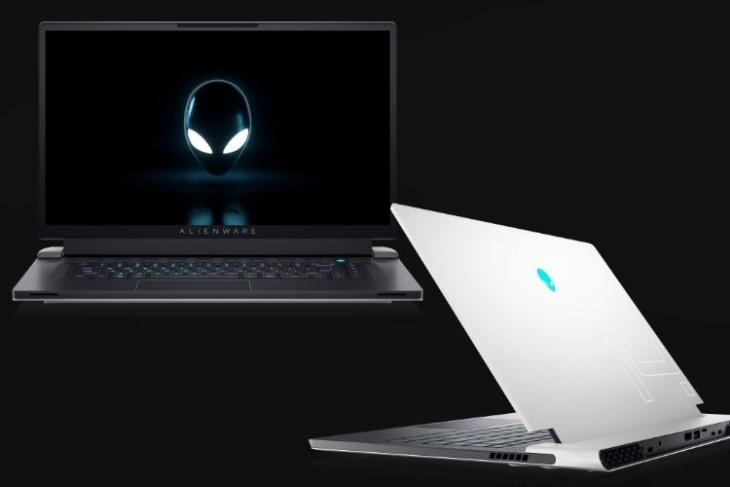 Dell’s gaming wing Alienware announced several new gaming-focused products during its CES 2022 event. These include a new 14-inch ultra-thin gaming laptop, upgraded versions of its existing X-series laptops, a new M-series gaming laptop, and a handful of accessories. These laptops pack the latest and greatest components from companies, including Intel’s new 12th-Gen H-series processors, AMD’s Ryzen 6000-series CPUs, Nvidia’s new RTX 30-series GPUs, and Intel Arc GPUs. Let’s take a look at each of them below.

Starting with the Alienware X14, it is the company’s thinnest laptop to date and is designed to be ultra-portable. The company says it was able to make it so thin because of its new, patent-pending hinge design. This allowed the company to pack more components inside the 14.5mm thick device, including its Cryo-Tech cooling system and a large 80Whr battery that, as per the company, can deliver 11 hours of HD video playback.

Under the hood, the X14 packs 12th-Gen Intel Core processors, up to the Core i7-12900H, Nvidia’s RTX3060 GPU with 7-phase voltage regulation, or Intel’s Arc GPU, presumably the first-gen Alchemist line, and DDR5 RAM clocked at 5,200Mhz. So, we can expect high-end gaming and graphical performance from the portable device and similar RAM performance as the X15 and the X17, which also support up to 5,200Mhz RAM.

However, users cannot change or upgrade the RAM on the X14 as Alienware will solder it to the board. For memory, on the other hand, users can have up to a 2TB M.2 SSD in the single M.2 slot. Furthermore, Alienware says that the X14 is the thinnest 14-inch gaming laptop to support Nvidia’s Advanced Optimus and G-Sync technologies. Other than these, the device is also the company’s first laptop that can use the onboard USB-C port for charging.

Apart from unveiling the X14 laptop, Alienware also announced upgraded versions of its existing X15 and X17 laptops. The new models dubbed the X15 R2 and the X17 R2, pack similar features as their predecessors, though the company is now offering them with upgraded specs, including Intel’s latest 12th-Gen Core processors, Nvidia’s GeForce RTX 30-series GPUs, and faster memory, which can now be clocked up to 6,400Mhz.

The Alienware M17 R5 is designed to be a powerful 17-inch AMD-centric gaming device, packing the latest Ryzen 6000-series CPUs, the newer Radeon RX GPUs, and all the other advanced features that are supported by the new components.

The device comes with the support for AMD SmartShift Max, SmartAccess Memory, and the debuting SmartAccess Graphics feature to deliver a lag-free and immersive gaming experience. Under the hood, the M17 R5 can pack up to the octa-core Ryzen 9 6890HX and a Radeon RX 6850XT GPU, paired with up 12GB of GDDR6 VRAM that is capable of drawing 175W of power using the SmartShift Max feature. The device can also pack up to a 4K display with support for a 120Hz refresh rate and AMD’s FreeSync technology.

For Nvidia lovers, Alienware has announced the M15 R7, which is a 15-inch gaming notebook that can pack either AMD’s Ryzen 6000-series processors or Intel’s 12th-Gen Core processors and Nvidia’s latest RTX 30-series GPUs, including the RTX 3080 Ti and the RTX 3070 Ti.

Coming to the prices of the latest Alienware laptops, the company has not revealed any information regarding them as of now. However, the company has confirmed that the new Alienware X14, X15 R2, X17 R2, M15 R7, and the M17 R5 laptops will release in India in the first half of 2022. We will keep you in the loop, so stay tuned to our website for further updates.