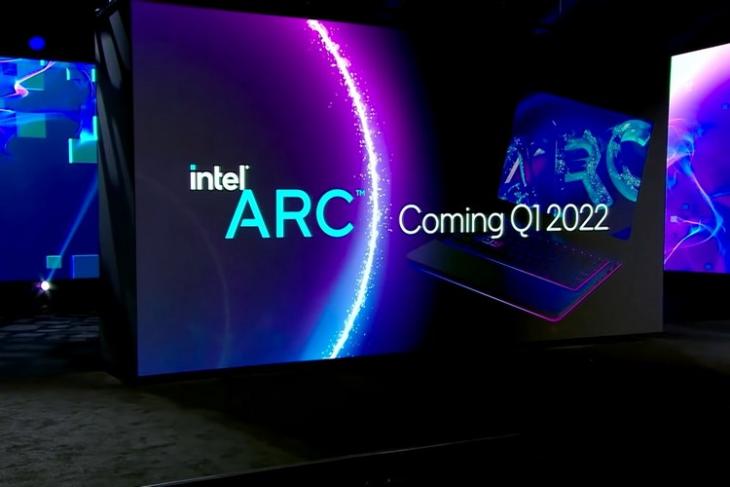 Back in August 2021, Intel announced that it will soon launch its own lineup of high-performance gaming GPUs to compete with AMD and Nvidia. Since then, we have seen various reports and leaked images of the much-anticipated Intel Arc GPUs surface online. And today, the chipmaker has confirmed that it has started shipping the first batch of Arc Alchemist GPUs to OEM partners for desktops and laptops.

During its presentation for CES 2022, Intel announced that it has started shipping the first-generation of the Arc Alchemist discrete GPUs to leading manufacturers like Samsung, Lenovo, MSI, Acer, Gigabyte, Haier, HP, Asus, and more. Although the company did not mention anything about the launch timeline for Intel Arc-powered machines, Lisa Pearce, the Vice President and General Manager at Intel’s Visual Compute Group, mentioned that they will launch over 50 laptops and desktops powered by the Intel Arc GPUs over the coming months.

Now, for those unaware, Intel’s Arc GPU line will cater to high-end gaming PCs and thin-and-light laptops in the market. Apart from the Arc Alchemist GPUs, Intel has also developed later generations of its GPUs codenamed Battlemage, Celestial, and Druid. While the first-gen Alchemist GPUs will release early this year, the latter ones will enter the market in the second half of 2022.

Coming to specs and features of the Intel Arc GPUs, the processors are designed to deliver high-end performance for gaming and graphic-intensive creative tasks. They will come with support for hardware-based ray-tracing, variable-rate shading, mesh shading, and also support for DirectX 12 Ultimate.

Furthermore, Intel states that its GPUs will be able to upscale low-res graphics to high resolutions without putting much pressure on the graphics processing unit, thanks to XeSS, the company’s AI-based supersampling technology. Plus, the company has already confirmed that it will not limit the crypto mining capabilities of the upcoming GPUs.

As for the price and commercial availability of the Alchemist GPUs, there is no information from the company as of now. However, during the presentation, Intel confirmed that the Intel Evo-branded laptops packing its new 12th-Gen Intel Core H-series processors will require discrete Arc GPUs. Hence, the company will likely release mobile versions of the new Arc GPUs in the market soon.