WhatsApp has been adding several subtle new features, like the label on forwarded messages and the ability to record longer voice messages without holding the record icon. Now, another feature called “Media Visibility”, which was added recently, has been polished in the recent update and is useful for hiding media, but is probably not something many users know about.

With the latest WhatsApp beta update (version 2.18.195), Media Visibility allows you to hide images, videos, or audios received via WhatsApp from the phone’s default Gallery app. While the feature was introduced in previous beta builds, the app now gets the ability to show or hide media for individual contact. 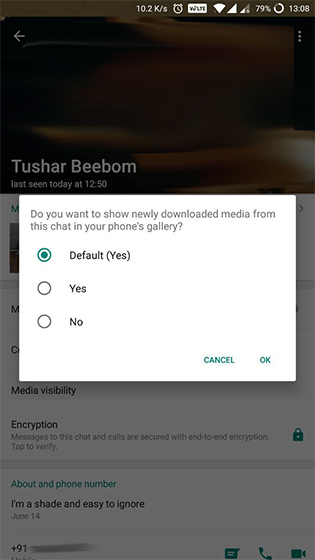 Media Visibility feature can be accessed by opening a contact’s page on WhatsApp. Here, you’ll find the feature and by tapping on it a new window opens up which lets you choose between “Yes” or “No” for showing the downloaded media in the gallery. You can also set your choice to “Default” which is the setting that applies to all the chats.

The “Default” has been preset to Yes, which means that unless you select “No” for a specific contact, media will be visible in the gallery. To change the default setting, you can head over to Settings and then tap on “Chats” where you can check or uncheck the checkbox beside Media Visibility option.

This is a very useful option if you do not wish to neglect media shared in a group or by a jovial friend but do not want it to clutter your gallery either. The feature is currently limited to WhatsApp beta and it should make its way to the stable version soon. The feature only applies to media received after the update, so your old photos will still show up in the Gallery app.

Alongside this, WhatsApp recently also rolled out group voice and group video calling feature in WhatsApp beta which you can enjoy even if you’re not in beta. Further, as promised at Facebook’s F8 Conference, WhatsApp will soon be receiving Stickers similar to Facebook Messenger or Hike Messenger to make conversations more interesting.