Ultra Wideband Technology (UWB) is the hot new topic in the town, especially after Samsung unveiled the Galaxy Note20 Ultra with a UWB chip in tow. Last year, Apple released the iPhone 11 series with a UWB chip (U1) under the hood. Many believe that Ultra Wideband is the new wireless protocol that is going to replace Bluetooth, but is that statement anywhere close to reality? Well, in this article, we are going to explain everything about Ultra Wideband Technology (UWB) so that you get a clear picture of what is to come. With that in mind, let’s now go through the article and learn about UWB in complete detail.

Everything About Ultra Wideband Technology (UWB)

Here, we are going to discuss all the aspects of Ultra Wideband Technology: from its very definition to the working mechanism. You can click on the link below and easily jump to the relevant section.

What is Ultra Wideband Technology (UWB)?

Before anything, let us learn what exactly is Ultra Wideband Technology in lucid terms. Just like WiFi and Bluetooth, Ultra Wideband Technology (shortly known as UWB) is a wireless technology. It leverages radio signals to communicate and transfer data between different devices. But there are some distinct characteristics of UWB that make it a powerful radio technology.

For instance, UWB uses a broad spectrum of frequencies (much higher than WiFi and Bluetooth; in GHz) which translates to significantly higher bandwidth (faster transfer speed). In addition, it consumes much less power than WiFi and Bluetooth standards. However, there is a downside to it. Due to the higher frequency, it can’t travel farther or penetrate obstacles like walls — similar to the 5GHz WiFi band or 5G mobile network. So for UWB to work properly, a clear line of sight is extremely necessary.

Other than that, there is one important dimension to UWB that you should make note of: positional accuracy. UWB can find the direction and precise location down to the centimeter level of a device. Due to such high accuracy, UWB is considered as the best wireless protocol for locating and communicating with devices in a quick and accurate manner.

How Does UWB Work?

Now that you have got the basics, let us get a bit technical. As I mentioned above, UWB operates in very high frequencies, to be precise, within the range of 3.1 to 10.6 GHz. In other words, this is simply another category of radio spectrum. Coming to the working mechanism, a UWB-equipped device emits signals (called pulse radio) over a large bandwidth in all directions. By the way, since the frequencies are so high, it does not interfere with other nearby radio signals which is a big advantage.

When another UWB-equipped device picks the pulse radio, it relays the information to the host device. Now using Time-of-flight (ToF) and Angle-of-arrival (AoA) data, the device determines the distance and accurate position of the emitting device. If you have read anything about Bluetooth 5.1, you would know that Bluetooth uses the same technique to find the direction of devices.

However, due to the higher frequencies used in UWB, the host device is able to repeat pulse radio tremendously within a second, making the device instantly discoverable. This immediate broadcasting of pulse radio is called repetition rate and it’s usually within the range of two gigapulses per second (which is an astronomical figure). Due to this high repetition rate, UWB is able to instantly discover, locate and transfer data without losing any moment. And that is how UWB brings immediate spatial and directional awareness around a device.

How is UWB Different From Bluetooth and WiFi?

The primary difference between UWB and Bluetooth/WiFi is the lack of positional and directional abilities in the latter. While Bluetooth did bring direction finding with 5.1 release, it’s not as fast and accurate as UWB. On top of that, Ultra Wideband consumes much less power than Bluetooth and WiFi because UWB generates radio energy at specific time intervals instead of random frequency response.

UWB has been in use for many past decades, most notably by the US Army for radar imaging. However, the technology was authorized for unlicensed use in 2002 by the Federal Communications Commission in the US. Later, the International Telecommunication Union (ITU) standardized UWB as another wireless radio technology.

As of now, not many consumer devices have UWB capability. However, that changed with Apple’s release of the iPhone 11 lineup in 2019 and now Samsung has released Galaxy Note20 Ultra with UWB support. Apple deployed UWB in iPhone 11 series using the U1 chip and it’s supposed to bring faster AirDrop transfers just by pointing the device to someone else’s iPhone. 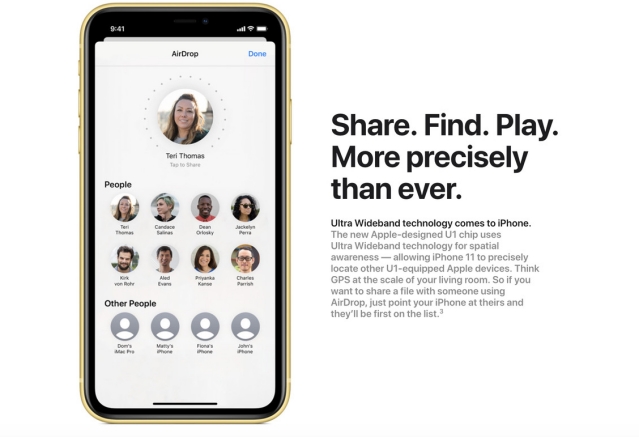 Similarly, Samsung has incorporated a UWB chip developed by NXP on the Galaxy Note20 Ultra. It will help you instantly discover nearby contacts and share files using Google’s Nearby Share feature. Apart from that, you can get a taste of UWB technology in the new SmartThings Find app. Using Augmented reality, you can find the position of other UWB-equipped devices. That’s really cool, right?

All said and done, it seems UWB will bring a paradigm shift in the Internet-of-things (IoT) space. The ability to control smart devices like lights, speakers just by pointing at them would really solve the problem of quick accessibility. Apart from that, we may see more applications of UWB in Apple’s upcoming AirTag and App Clips feature. And it would be really awesome if more smartphone manufacturers incorporate this new hardware and Google brings some great features built on top of UWB.

Conclusion: Where Will Ultra Wideband Technology End Up?

Well, I am not sure where UWB will head to, but at this point, it seems UWB holds huge potential and can be a game-changer for the interconnected future. Anyway, that is all from us. But what do you think about Ultra Wideband Technology? Tell us in the comments section below.