Skip to content
Home Internet What is Bluetooth 5.1? Everything You Need to Know

Bluetooth has been an integral part of our tech lives since the past decade or so. It’s what we use to connect our wireless headphones, keyboards, mouses, and other accessories to our main computers and smartphones. That said, despite being such an important aspect of wireless technology, Bluetooth has always received a lot of flak. Bluetooth connections are unstable, the file transfer speeds are terrible, and there is no defining feature which makes it stand out. Well, that’s all about to change with the new Bluetooth 5.1 and here is everything that you need to know about it:

To put it plainly, Bluetooth 5.1 is the latest standard of Bluetooth technology which is bringing a ton of new improvements. Built on top of the current, Bluetooth 5.0 standard, the new Bluetooth 5.1 technology will not only improve connection stability but also provide real-time data including location and proximity sensing.

What Are the Improvements Coming with Bluetooth 5.1?

Bluetooth 5.1 is bringing a ton of new improvements which will make the upcoming compatible devices like homing missiles. Basically, it will allow you to find your Bluetooth 5.1 devices and to locate them to a couple of inches their exact location. This is made possible by a number of improvements coming with the Bluetooth 5.1. Here are the major improvements that you need to know about:

One of the biggest improvements coming with the Bluetooth 5.1 is called “Direction Finding” makes it possible for Bluetooth devices to determine the direction of Bluetooth signal transmission. Currently, Bluetooth uses signal strength to estimate distance which is not so accurate. The new Bluetooth 5.1 standard will use a combination of two different methods for determining the angle that a Bluetooth signal is being transmitted from which will result in a high degree of accuracy.

The two methods are called Angle of Arrival (AoA) and Angle of Departure (AoD) and require one of the two communicating devices to have an array of multiple antennae. The antenna is included in the receiving device and transmitting device when AoA and AoD methods are being used respectively. This new feature allows the Bluetooth Low Energy (LE) controller in the receiving device to generate a set of data which can be used to calculate the directional angle between receiving and transmitting device.

Developers can then use this directional angle information to create Bluetooth-based positioning systems including real-time locating systems (RTLS) and indoor positioning systems (IPS). The real-life benefits of this enhancement are beyond comprehension. Basically, it will allow you to track your Bluetooth 5.1 enabled devices to within inches of their exact location. So, next time when you lose your wireless earphones, you will be able to find them quickly and efficiently. No more tossing around your entire sofa to look for your keys, you will know exactly which cushion you need to lift to find it.

All Bluetooth Low Energy connected devices use the Generic Attribute Profile (GATT) for establishing a connection with each other. All GATT devices contain a database known as the attributes table which consists of device identifier information such as GATT service, characteristic, and descriptor structural details and values. Whenever a Bluetooth device is establishing a connection with another device, it sends a service discovery request to acquire these attributes and use it to establish this connection. 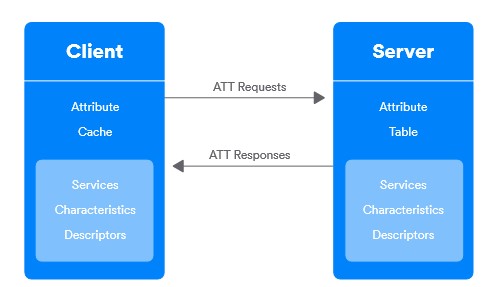 In the current Bluetooth 5.0 standard, this service discovery request takes up a lot of time and energy which might result in poor connection and higher power consumption. With the latest Bluetooth 5.1 standard, the attributes caching is improved. It now allows clients without a trusted relationship with a server to retain their attribute cache across connections which allows a device to skip the discovery process and establish a connection.

Since the discovery process is not repeated every time a device is establishing a connection, it results in lower connection drops and improves battery life. Do note, that GATT Caching is a fairly complex subject like all the other points that we are discussing in this article. I have tried to oversimplify these topics to make it easier to understand. For full technical details, you should visit the official Bluetooth website.

There are two major enhancements coming to the Bluetooth advertising feature which are mentioned below:

Today we are surrounded by connected devices and most of them are using the same radio channels, they often cause connection problems with each other, a concept which I have explained thoroughly in our 5 GHz explanation article. While Bluetooth is starkly different from WiFi, the same basic concept applies here too which means that in an area where too many Bluetooth devices are advertising their connection, they will interact and cause connection problems. Bluetooth 5.1 aims to solve this problem by bringing Bluetooth advertising enhancements.

In the current Bluetooth 5.0 standard, the Bluetooth LE devices broadcast their availability to nearby devices uses a process called advertising where Bluetooth devices transmit data in packets over 3 specific channels in sequence 37 then 38, and 39, that too strictly in that order. Since there are only three channels if two or more devices are present, there is a high probability of data packet collision which results in connection drops. Bluetooth 5.0 tries to mitigate this problem by introducing a random delay of 0-10 ms between each advertising instance, however, it’s not that effective.

With Bluetooth 5.1, devices will not have to follow the strict protocol of transmitting data packets in the specified sequence mentioned above. Instead, devices can now select channels at random which reduces the potential for advertising packet collisions.

The current Bluetooth 5.0 standard comes with a “SyncInfo” feature which allows Bluetooth devices to synchronize their advertising and scanning schedules. What this means is that a master and a client device sync with each other so that the master device is advertising connection at the same time when the client device is requesting it. This results in lower power consumption as both the devices are transmitting data packets at the same time so the chances of missing connection requests are slim to none. 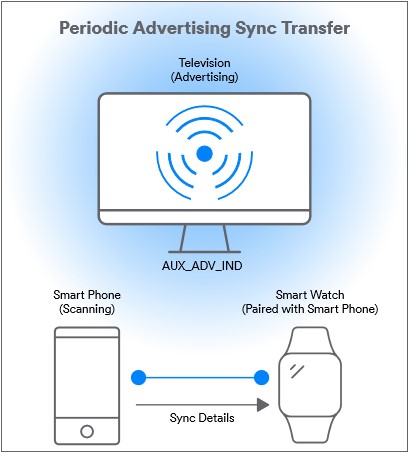 Bluetooth 5.1 improves upon this feature by bringing a new Periodic Advertising Sync Transfer (PAST) technology which allows devices to share these scheduling data with each other. For example, if my smartphone has already established a schedule with my television, it can share that schedule with my smartwatch so that it doesn’t have to waste energy for doing the same. This is especially beneficial for Bluetooth LE devices such as a smartwatch, smart bands, tile trackers, and more as they don’t have to waste energy for the scheduling process and hence can last longer.

Apart from above-mentioned major enhancements, Bluetooth 5.1 is also bringing a ton of minor enhancements. Firstly, There’s a new Sleep Clock Accuracy Update mechanism which results in lower power consumption. It is also bringing HCI support for debugging keys in low energy secure connections. It has also become permissible to include SID and ADI in scan response reports and scan response packets respectively. If you don’t understand what any of this means, don’t worry. Just know that these minor improvements are aimed at improving the security and decreasing power consumption by Bluetooth LE devices.

Bluetooth 5.1 is also bringing GATT and advertising improvements both of which should result in improved connectivity and battery life. While Bluetooth 5.0 significantly improved battery life over its predecessor, any improvement in this regard is always welcome. What you are not getting is any significant improvement in connection range or data transfer speed. These should theoretically get better but you won’t see any effect in day to day use case scenario.

Bluetooth 5.1 has just been released to developers who will utilize its underpinning technology to bring improved Bluetooth devices. However, that will take at least a year and you will only be able to see first Bluetooth 5.1 compatible devices by the start of next year.

SEE ALSO: What is WiFi 6? Everything You Need to Know

Impressed with the new Bluetooth 5.1 Update?

While Bluetooth 5.1 update doesn’t seem to be as big an update as Bluetooth 5.0, it is bringing one thing that Bluetooth always lacked, which is, a USP feature that makes it stand out. The new location finding feature is incredible and I can see a near future where we are using Bluetooth LE trackers to keep track of our devices. What do you think about this new update? Let us know in the comments section below.