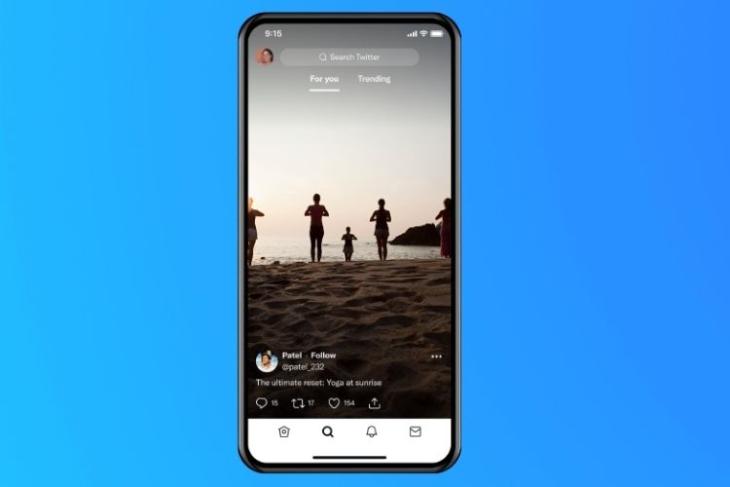 Twitter is known for testing and introducing tons of features to improve the user experience. It recently started testing emoji reactions and even an edge-to-edge Twitter feed. But that’s not all. The micro-blogging platform is now testing a feature inspired by TikTok. It is revealed that the Twitter app is testing a vertical feed for users to scroll through various trending and personalized videos.

The company, via its Support Twitter account, announced that it is testing the TikTok-like vertical video format for its Explore section for select Android and iOS users who use the app in English. The feature entirely redesigns the Explore section of the app and offers you a vertically-scrollable video feed with dedicated “For You” and “Trending” tabs for users.

Twitter, in a statement to TechCrunch, further commented on the test saying, “We’re testing out a revamped, more personalized Explore page to make it easier for you to unwind, find new interests, and see what’s happening.”

However, it remains to be seen when the new Twitter format reaches all users. With this, the platform will be the latest one to join the “Copy TikTok” bandwagon. Popular apps like Spotify, Snapchat, and even Netflix, and even Instagram have already capitalized on the TikTok feature, and turns out, it is arguably working well for them.

With the new Explore Page, Twitter is aiming to offer an easy-to-use content format for users to explore various topics and videos. It can also help users discover more topics on the app. To recall, this isn’t the first time Twitter has copied a feature. It recently introduced Spaces, a copy of the audio-focused social app Clubhouse and the now-dead Fleets feature, copied from Snapchat Stories. But, it remains to be seen whether or not this new copied feature works for the platform.

To remind you, the functionality is available for select users right now. If you see the new Twitter feed, let us know in the comments below.