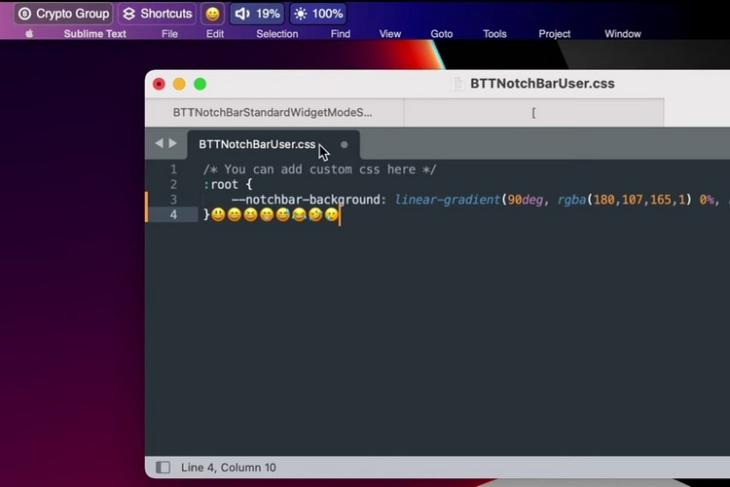 Ever since Apple put an iPhone-like notch on the M1 Pro- and M1 Max-powered 14-inch and 16-inch MacBook Pro earlier this year, there has been a lot of talk about it. Although the notched display on the laptops offers extra screen real estate, it does not do anything special. However, a new feature in one of the best macOS utility apps can now convert the notch-area of the MacBook Pro models into a TouchBar-like space with dedicated space for useful shortcuts and widgets.

BetterTouchTool is a popular utility tool for macOS that lets users customize various input devices on your Mac to make them more useful. So, following the release of the notched MacBook Pro models earlier this year, the tool added a new Notch Bar feature that lets users add a black bar on either side of the notch to hide it on the latest MacBook models.

Now, you might say that there are many third-party apps that can do that to hide the weird notch on the MacBook Pro devices. Even Apple shared an official support post that details how users can adjust apps to appear below the notched area. However, BetterTouchTool’s Notch Bar feature takes it to another level by allowing users to add various widgets and shortcuts to the black bar hiding the notch.

Moreover, you can even customize the icon, colors, and label of each of the buttons on the Notch Bar to give it a more personalized look. And as the Notch Bar is omnipresent, you can access the widgets and the shortcuts from any screen on your device. Hence, the Notch Bar feature on BetterTouchTool essentially converts the notched area into a Touch Bar-like interface, which Apple eliminated from the latest MacBook models.

In a recent video on YouTube, Andreas Hegenberg, the developer of BetterTouchTool, demoed two kinds of orientation for the Notch Bar. The first one hides the macOS menu bar until you take your cursor to the top of the screen, and the other one puts the Notch Bar above the static menu bar.

Now, although the Notch Bar feature is pretty intriguing, it is worth mentioning that it is still in its beta phase. As a result, it contains a few bugs, which need to be ironed out by the developer. However, the feature should be ready and free of bugs in the coming days.

You can try BetterTouchTool for free for a trial period of 45 days. However, if you want to use the tool for your macOS devices, you would require to buy a license from its official website.