Skip to content
Home Featured The Samsung Galaxy Note 9 Is Amazing, But Has Outlived Its Niche

Samsung launched the new Galaxy Note 9 smartphone in India yesterday with a price tag of Rs. 67,900. And honestly, everyone, I mean everyone, is raving about this phone and all its awesome features, with good reason. So, when the phone showed up at Beebom office for review, I decided to take it for a spin and see if see it’s worth the hype.

Before we begin, I’d like to point out that this isn’t my review of the Galaxy Note 9. This is just my opinion on whether the Galaxy Note is relevant in 2018. I’ve spent the past few days using the Galaxy Note 9, and I admit it has a lot of exciting features, but it also doesn’t offer anything out of the ordinary when you compare it to the other Samsung flagship of the year, the Galaxy S9+.

In my opinion, the Note 9 takes everything that its predecessor is good at and made it better, but it still doesn’t make sense if you already have a Note 8 or an S9+. Take the new and improved S Pen, for instance. The S Pen is what used to distinguish the Note line-up from the Galaxy S flagships. And in the Note 9’s case, the new S Pen is what sets it apart from the Note 8 itself. But is that enough to attract people to the new Note 9?

Is The S Pen Really For You?

When Samsung announced the Galaxy Note 9 on stage, I was honestly very happy to see some new features for the S Pen. Now you can use it as a remote control and click a photo with its button, scroll down on a webpage in Chrome, or change slides while doing a presentation. 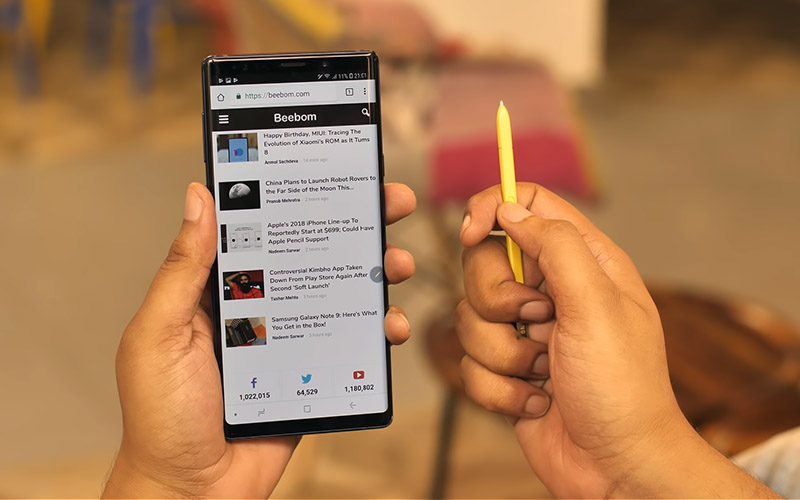 That being said, if you’re someone who’ve never used an S Pen before, then you won’t find it very productive this time either. I am not saying it’s bad by any means. It has improved with each iteration, but you’ll still find yourself jotting down notes or doodling around the interface at best. The way I see it, the new S Pen is only for Samsung geeks – those trying to show off their shiny new Note phone.

Even Beebom designer and illustrator Durgesh Kukreti couldn’t figure out a productive use for the S Pen. He doodled on the fantastic display to create a few illustrations and sketches, but designers and artists would be better off with something like the iPad Pro with a bigger display, and the Apple Pencil. Or even the new Surface notebooks and the Surface pen.

The S Pen was great in the first few Note phones when other premium phones didn’t opt for ‘phablet’ form factor. Phones these days have an equally large display – some even larger than the Note 9.

When Samsung debuted the first Note smartphone back in 2011, it was billed as a powerful ‘phablet’ – a one-of-a-kind device. It had a unique personality and built a strong reputation on the back of powerful hardware and a huge list of software features. The 5.3-inch AMOLED display was huge for the time, and the S Pen was a novel feature. It was a breath of fresh air, but I am afraid I can’t say the same in 2018.

So, it got me thinking – who is the Samsung Galaxy Note 9 really for? Or rather who is Samsung really trying to target with the Note line up in 2018? It doesn’t change much on the S9+, in all honesty.

The Galaxy Note 9 looks and feels like a slightly bigger, squarer version of the S9+. It’s not just looks, but even in terms of performance, software, user experience and usability, the Galaxy Note 9 feels just like the Galaxy S9+ minus the S Pen.

Look, I know DisplayMate says the Note 9 has the best smartphone display, but they said the exact same thing for the Galaxy S9+ as well. And we challenge anyone to find flaws in the S9+ panel. Heck, I use a Galaxy S8 from last year and it still turns heads when I am using it in the public.

And for the camera? The Note 9 and the Galaxy S9+ share the same sensors. There are some software improvements on the Note 9, but that could come to the S9+ too, given the nearly identical hardware. Even when it comes to media consumption, the S9+ has a great Infinity display and stereo speakers, which are still considered to be one of the best on the market. It also has similar in-box accessories to the Note 9.

The whole argument about buying a Galaxy Note flagship for better performance and immersive media experience is no longer valid in 2018, at least according to me. You can get that in a Galaxy S9+ too.

The Galaxy Note 9 is, without a doubt, a beast of a smartphone. In fact, it is powerful enough to hold its own against devices that are yet to be announced this year, be it Apple’s upcoming iPhone lineup or Google’s new Pixel phones. Just like any of the previous Galaxy Note device, the Note 9 is packed with features which you’ll probably never use, but are there anyway, in case you want to.

That being said, the Galaxy S9+, which is now available for a comparatively cheaper price, is still worth considering in 2018. I say that because the S9+ essentially has the same set of cameras, the same SoC, an equally beautiful Super AMOLED Infinity display and basically the same software. If you can make peace with a slightly smaller battery, and are ready to give up on the S Pen features, then I’d say the S9+ is the device you should be buying.

I think that the Note 9 is a product that’s outlived its niche, and is no longer relevant. Samsung may feel the same too, as it’s launching three Galaxy S10 variants next year, and may not have room for another premium Note device. Only time will tell whether the Note series will live on to see a 10th iteration.

Anyway, what are your thoughts on the Note 9 and do you think it’s better to buy the cheaper and almost identical Galaxy S9+ instead of the latest Samsung premium phone? Let us know your thoughts in the comment section below.