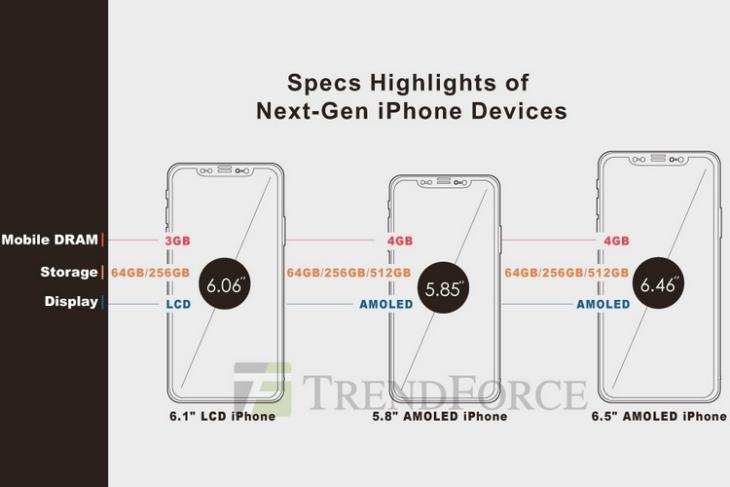 Apple is all set to launch three iPhone models later this year that will reportedly start at $699 and they might also come with Apple Pencil support, claims a new report from leading market intelligence company, TrendForce.

As per the report, all three upcoming iPhone models will feature the Face ID authentication system, with two of the premium models sporting an AMOLED display while the lower-end variant will feature an LCD display, as has been rumoured for months.

The report adds that the two high-end variants will pack a 5.8-inch and 6.5-inch AMOLED display and have already been in production since July, while the low-end iPhone model with a 6.1-inch LCD display will enter production in mid-September.

TrendForce’s report states that the LCD iPhone variant will be placed as Apple’s main product this year as the device alone reportedly accounts for 50% of the net production share of all three upcoming iPhone models. As for the device’s specs, it will reportedly feature 3GB of RAM and 64/256 GB of internal storage.

Furthermore, to tackle the competition from other smartphone makers, Apple has reportedly bargained with partners to reduce the price of components in order to keep the price of the LCD iPhone around the $699 mark. As for the premium AMOLED iPhone variants, both the 5.8-inch and 6.5-inch models will pack 4GB of RAM and will be available in three storage options: 64GB, 256GB and 512GB.

The 5.8-inch model will reportedly act as a successor to the iPhone X and might be priced at $899 for the base variant. The larger 6.5-inch model, which is also rumored to be the iPhone X Plus, is expected to start at $999. However, the dual-SIM iPhone models will be available in only a few markets, which may not include India for the time being.