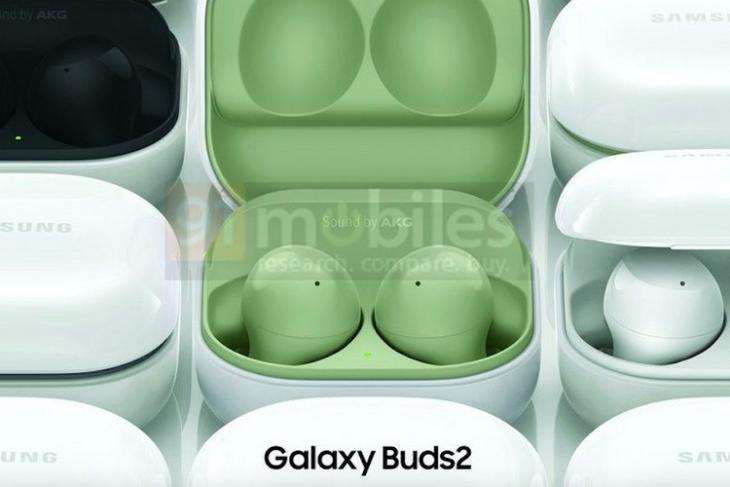 Last month, we saw the FCC certification listing of Galaxy Buds 2, Samsung’s upcoming TWS earbuds. The listing included a set of images that confirm the earbuds’ design and battery capacity. A new report from 91Mobiles citing industry sources now shows off the official press renders of the earbuds.

According to the report, Samsung will sell the Galaxy Buds 2 in four color variants – Black, White, Purple, and Green. From the looks of it, the earbuds will feature a glossy design on the outside and equip two microphones. Check out the renders below, courtesy of 91Mobiles:

What about Active Noise Cancellation? Well, according to the tipster Ice Universe, the Galaxy Buds 2 will not support ANC and would rather support noise reduction. As a result, you will have to look at Galaxy Buds Live or Galaxy Buds Pro if you are in the market for Samsung’s earbuds that offer ANC.

Coming to the case, in what looks like an odd decision, the exterior of the case will be White regardless of the earbuds’ color variant. However, you get matching colors on the inside, as you can see in the leaked renders below. The design of the case remains the same as recently launched Buds Pro and Buds Live.

According to Galaxy Buds 2’s FCC listing, the earbuds will have a 120mAh battery with 60mAh for each earbud. Meanwhile, the charging case will have a 500mAh battery.

Samsung is expected to announce these earbuds either on 28th June at MWC 2021 or alongside the Galaxy Z Fold 3 and Z Flip 3 on August 3. We will be updating you when Samsung launches the earbuds, so stay tuned for more information.