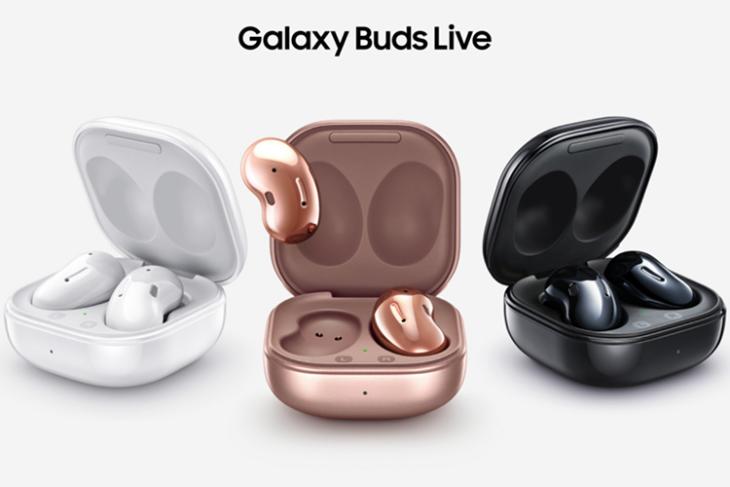 Alongside the Galaxy Watch 3, Samsung has also launched the new Galaxy Buds Live (thank god they didn’t call them ‘Bean’). The new truly wireless earbuds from Samsung come with the much leaked kidney-bean like design, and with active noise cancellation. Samsung calls this “one-of-a-kind aesthetic” which, sure, but I don’t know how I feel about it still.

To pull this off, Samsung says it had to reconfigure the traditional earbud design and lay out internals in a horizontal layout instead. The earbuds also don’t have any tips, which Samsung says helps them conform to the shape your ears, and be more comfortable.

Inside, there is a 12mm driver and a bass duct which is claimed to offer deep and rich sound. There are also a total of three mics here, along with a Voice Pickup Unit. According to the company, these ensure that your voice goes through crystal clear on phone calls.

As I mentioned above, the earbuds also come with active noise cancellation, and according to the company’s tests, they cut down up to 97% noise in low frequency bands. So they should be good enough to enjoy your music when you’re out and about, or sitting in an airplane. As far as I can tell, the earbuds don’t feature any transparency feature that’s found in the AirPods Pro, or the newly launched (in India) Sony WF-1000XM3. However, the company does say that you can still listen to announcements and conversations through the earbuds, which is by design. Although I personally don’t like that.

While the earbuds are compatible with pretty much every Android and iOS device out there, if you use them with Samsung phones there are additional features for you. With the Note 20, you can reportedly use the earbuds as microphones to record conversations. Plus, there is a Game Mode which reduces latency so you can enjoy your games without any audio lag.

Samsung claims that the Buds Live offer 6 hours of playback on a charge, and with the charging case you can add on another 15 hours to that. Plus, you can quickly charge the earbuds for 5 minutes in the case and get another hour of playback time.

The Galaxy Buds Live are available in Mystic Bronze, Mystic White, and Mystic Black colours. Priced at $169.99, the earbuds will be available from August 6.

The Galaxy Buds Live have today been launched in India. The earphones will go on sale starting from August 25 for ₹14,990 and will be available from Samsung.com, Samsung Opera House, retail stores, and leading e-commerce websites.