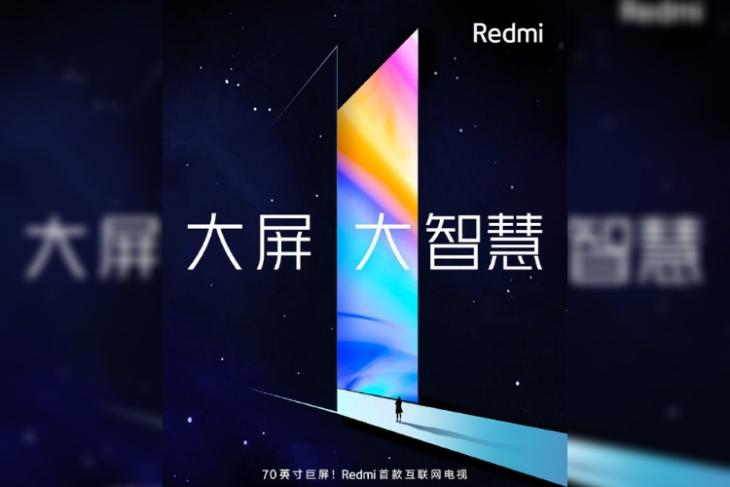 Xiaomi has finally put an end to the insistent flow of rumors and leaks, confirming today the launch of its first-ever smart TV – the Redmi TV on August 29 in China. The Chinese giant will also use their stage to launch the much-awaited Redmi Note 8, possibly with a taller screen and 64MP camera sensor.

The teaser for Redmi TV was shared by all prominent Xiaomi officials on Weibo, including CEO Lei Jun. He not only reiterated that the Redmi TV has a massive 70-inch screen, but also confirmed the launch of the Redmi Note 7 successor. A user in the comments asked Jun whether the Redmi Note 8 will debut the same day, alongside the Redmi TV. It gives me immense pleasure to say that Jun replied with a thumbs-up emoji to affirm the launch of their next smartphone.

If the Redmi Note 8 is coming next week, we can expect Xiaomi to start teasing not only the smartphone but also its major features in the coming days. Not a whole lot of details for the Redmi Note 8 have leaked online but we have written about what we expect from Xiaomi’s next budget blockbuster.

In another Weibo post, Lei Jun has talked about the Redmi Note 8 saying that it will have better cameras, better battery life, and a higher screen to body ratio. This means we can expect a bezel-less AMOLED screen like the Redmi K20, the 64MP camera Redmi showed off earlier this month, and the recently launched Helio G90T chipset onboard.

Also, we can expect Xiaomi to unveil the entry-level Redmi 8A, which leaked in hands-on images earlier today. So, are you looking forward to the Redmi TV and Note 8? Share your expectations from these devices in the comments below.