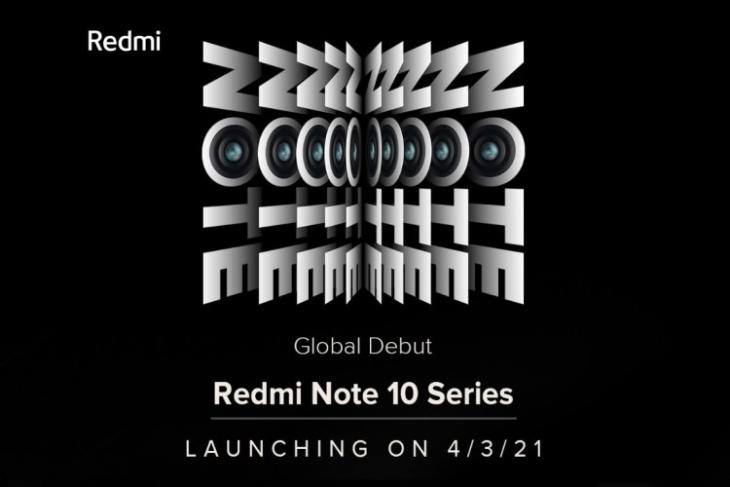 In an official tweet sent out by the Redmi India handle, Xiaomi announced that the Redmi Note 10 series “is all set for its global debut on 4/3/2021.” The teaser reveals nothing about the two upcoming phones but there seems to be a heavy focus on the camera. The ‘O’ for Note is a camera sensor, possibly a 108MP one.

#RedmiNote10 Series is all set for it's global debut on 4/3/21! 🚀#RedmiNote has been India's most loved smartphone & we're thrilled to bring you the next #10on10 experience!

The Redmi Note 10 series is exclusive to Amazon India. The company has set up a dedicated microsite on its official, as well as the e-tailer’s website. But, they don’t reveal any details about the upcoming devices.

The rumor mill, however, suggests that Xiaomi will unveil both 4G and 5G-enabled Redmi Note 10 devices in India. These will be the first Redmi Note devices to support 5G connectivity in the country. You can check out the rest of the Redmi Note 10 specs right here:

The standard Redmi Note 10 is expected to arrive with a 120Hz LCD display. It will be yet another first for the Redmi Note series in India. The Redmi Note 9 series included 60Hz LCD panels. It will be powered by Snapdragon 732G chipset, along with up to 6GB RAM and 64Gb built-in storage. This device will also feature a quad-camera setup and a massive 5,000mAh battery, as per the leaks. 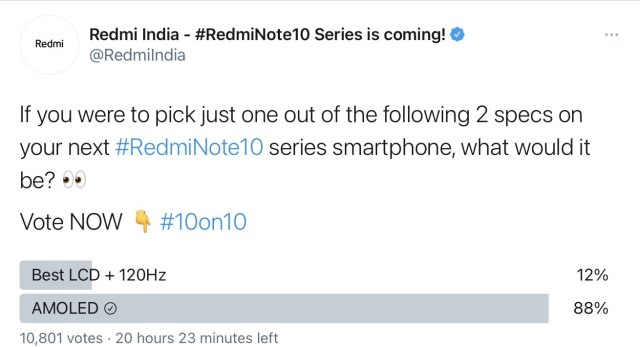 While the standard model will include an LCD panel, Redmi Note 10 Pro will arrive with an AMOLED display onboard. Xiaomi recently conducted (and then deleted) a poll to see whether users want an LCD or AMOLED panel on the Redmi Note 10. The latter won by a landslide as you can see in the screenshot above.

Apart from the AMOLED display, Redmi Note 10 Pro will be powered by a 5G chipset. It could possibly be the MediaTek Dimensity 800U – the same as the Realme X7. You will also find a 108MP quad-camera setup and a 5,000mAh battery onboard. These are all the specifications known for this smartphone at the moment. We can expect to see more details pop up online in the days leading up to the launch.