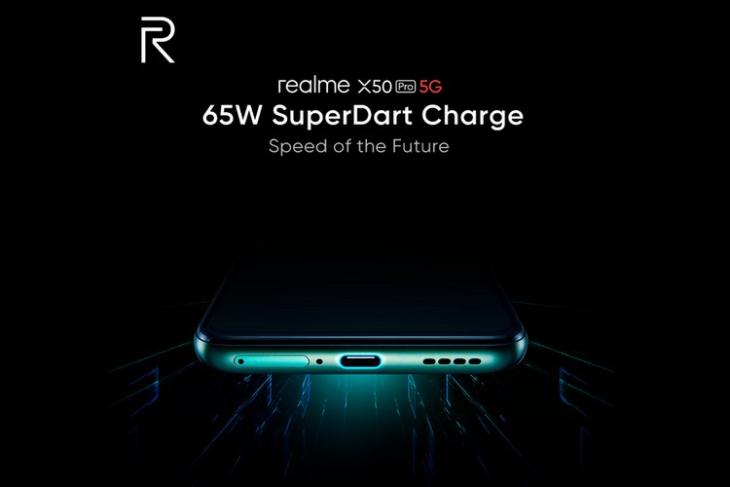 The upcoming Realme X50 Pro 5G is expected to be a high-end device with a boatload of premium features, and one of those has been revealed today by the company’s European Twitter account.

According to Realme Europe, the phone will ship with 65W SuperDart Charging. This is an upgrade from the company’s 50W SuperVOOC fast-charging technology, both of which it’s borrowed from Oppo. The company is keeping the rest of the tech specs under wraps for now, but we will hopefully know more in the days leading up to the launch, which will be streamed online from Madrid instead of MWC 2020.

We could think of a million situations in which having no battery could ruin your day.

But during the time you have been thinking about this, you would have already charged the #realmeX50Pro with its 65W SuperDart Charge to keep you going. #realme5G

In another noteworthy development, Realme India CEO Madhav Sheth didn’t miss out on an opportunity to take a dig at Xiaomi and its 50W fast-charging tech in the flagship Mi 10 Pro, which was launched just yesterday. In a tweet posted late last night, Sheth said ‘Not 50W, but 65W’ in a not-so-subtle reference to Xiaomi’s flagship. Sheth also claimed that Realme’s 65W fast-charging mechanism will generate no excess heat while charging, thereby enhancing the phone’s battery life.

Following the launch of its first 5G phone, the Realme X50 in China last month, the BBK-owned brand was expected to unveil the Realme X50 Pro at the MWC 2020 in Barcelona later this month. However, following the cancellation of the event because of the novel coronavirus outbreak, the company has shifted the launch to Madrid, but it will be held online on February 24, presumably, to reduce the risk of transmission.

Meanwhile, Sheth will be one of the attendees at the Madrid event and is expected to lay out the company’s future AIoT plans. He will most likely talk about the upcoming Realme TV, which is confirmed to be unveiled at MWC 2020 alongside the Realme X50 Pro. It will be interesting to see if Realme goes toe-to-toe with Xiaomi’s Mi TV lineup by pricing its smart TVs super-aggressively or opts for higher margins and goes the way of the OnePlus TV, which was launched last year starting at Rs. 69,990.