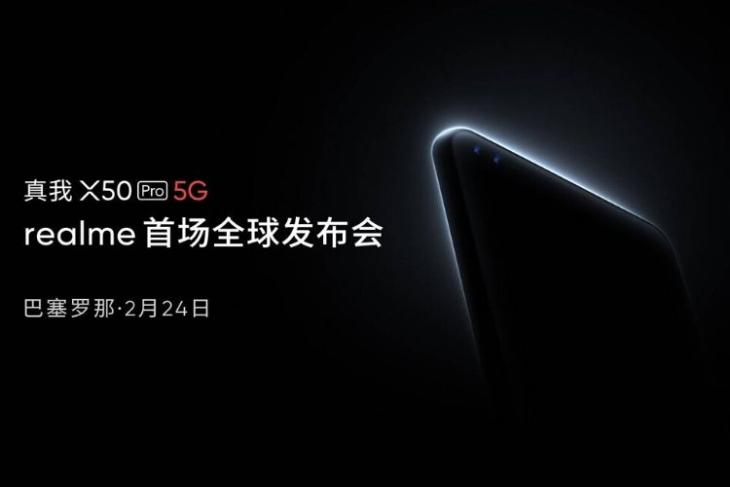 Earlier last week, Realme revealed that it will launch a 5G smartphone at MWC 2020. The company also teased that it will be their next flagship – the Realme X50 Pro 5G – with the latest Snapdragon 865 chipset and a dual-camera punch-hole system. Well, Realme has today confirmed the launch date for its 5G-enabled flagship smartphone.

In an official post on Weibo, Realme has confirmed that the Realme X50 Pro 5G will be unveiled on February 24. The company will hold its first-ever global conference at this year’s MWC, moving beyond the confines of its biggest markets – India and China.

Thanks to a screenshot shared by Realme China CMO Xu Qi Chase, we already know the key internal specs for the Realme X50 Pro 5G. It’s confirmed to come equipped with the Snapdragon 865 chipset and Snapdragon X55 5G modem.

We know that it will boast up to 12GB LPDDR5 RAM and 256GB UFS 3.0 storage to provide an AnTuTu benchmark score of 5,74,985. This may be a leaked benchmark score but it’s one of the highest we have seen on a flagship.

Though we haven’t gotten a good look at the front or rear, the screenshot also hints at a Full-HD+ display with a 1080 x 2400pixel resolution and a 20:9 aspect ratio. Apart from this, we expect the display to be an AMOLED panel with a 120Hz refresh rate. The flagship smartphone will look similar to its younger sibling, the Realme X50, only with an upgraded panel.

There’s not a whole lot known about the Realme X50 Pro 5G’s cameras but we expect the company to offer a setup similar to its younger sibling. Also, we are not ruling out the possibility of 50W SuperVOOC fast-charging to be present on board.

Last year’s Realme X2 Pro has proven to be a flagship killer, taking on the Redmi K20 Pro and OnePlus 7T in the premium segment. Will Realme X50 Pro live up to the expectation? What are your expectations from this flagship? Tell us in the comments below.