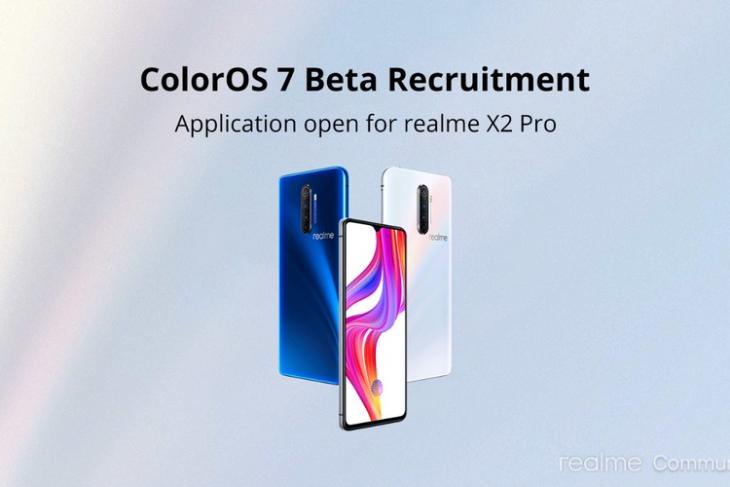 A week after Oppo unveiled ColorOS 7 at an event in China, Realme CEO, Madhav Sheth, has announced that the company has opened registrations for Realme X2 Pro owners to sign-up for the software’s beta testing program. The company had earlier revealed that the beta rollout will begin December 18th, although the stable build will only be available next March. The software will eventually roll out to a number of Realme devices, but will start off with the all-new X2 Pro.

Sheth also shared a couple of screenshots of what is believed to be an early build of the new software running on the X2 Pro. As can be seen from the screenshots in the embedded tweet below, they look relatively similar to ColorOS 6, which means those of you who are hoping for a relatively more stock-Android experience will still have to wait for RealmeOS, which is still under development and may not be ready for prime-time any time soon.

Good news for all #realmeX2Pro users!
You guys can be the first ones to test the ColorOS 7. Join the Beta testing Program.

In case you own the Realme X2 Pro, you may sign-up for the beta program as long as you’re an Indian resident aged 18 or more. Do note that you’ll be required to provide an official ID (Aadhaar card etc.) and will have to sign an NDA (non-disclosure agreement) before you can be accepted into the program. If all of that doesn’t scare you away, you can check out the detailed T&C at the link above.

Do note that the window for accepting applications is from November 27 to December 3, which means you have less than a week to make your move. Realme says it will contact successful applicants via email, and the final list of Beta testers will be announced on 9th December. As mentioned already, the testing itself will commence December 18th. You can check out our detailed article about ColorOS 7 in case you want to know more about the upcoming software.