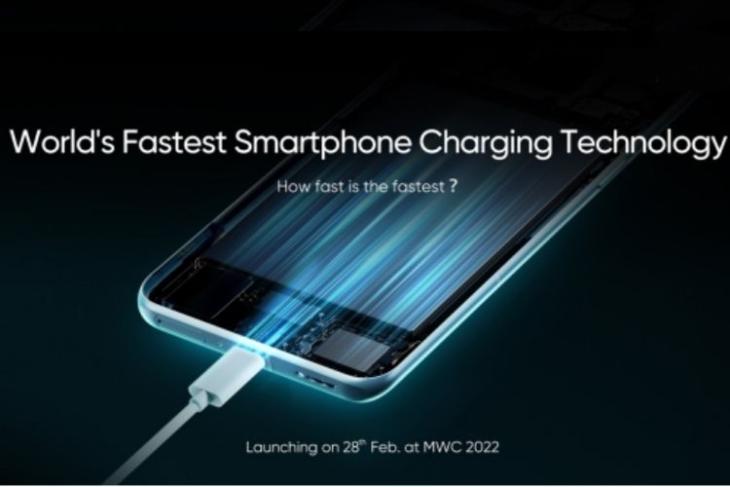 Realme wants to up its ‘fast charging’ game, and for this, the company has announced that it will launch the world’s fastest smartphone charging technology during this year’s Mobile World Congress event. Here’s what we can expect from the company.

The company’s new fast-charging tech will be introduced on February 28, which is the first day of MWC 2022. The event will go on until March 3. While Realme has claimed the technology to be the fastest, we still don’t know the kind of fast charging it will support.

That said, we have a hint. Realme is speculated to announce its 150W fast charging tech, which could come with support for Oppo’s 160W fast charger. There’s no word on how fast it will be as compared to the current 120W fast charging tech. Although the technology is slower than Xiaomi’s 200W technology, you must know that it hasn’t gone commercial yet.

Realme’s new tech will join the 125W UltraDart fast charging, which was announced two years ago. It is claimed to charge a Realme phone by 33% in just 3 mins. It too hasn’t reached any commercial smartphone yet.

Meanwhile, Realme, at the recent Realme 9 Pro series launch event in India, announced that it will launch the GT 2 series globally at MWC 2022. To recall, the flagship phone with the Snapdragon 8 Gen 1 chipset was announced back in January this year.

To know more about this fast charging tech, we will have to wait for a week. Until then, do tell us about your guesses on how fact Realme’s charging tech could be in the comments below!