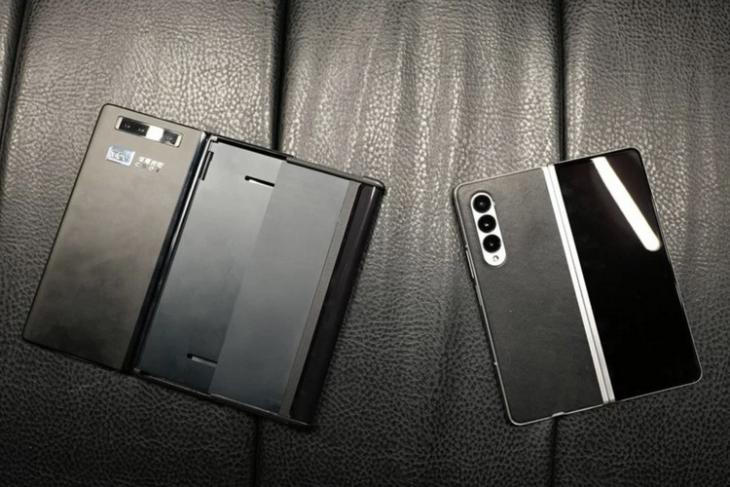 Mobile World Conference (MWC) 2022 kicked off in Barcelona today, and as is usual, TCL has shown off a bunch of foldable new foldable smartphones. These include the TCL Ultra Flex and the TCL Fold n Roll. Both the devices have their own unique functionalities, and here we have some hands-on images showcasing these TCL foldables in the real world. So, let’s check them out.

Popular YouTuber MrMobile was able to get some hands-on time with TCL’s latest foldable concepts and shared his thoughts with Android Central recently. So, let’s take a look at the TCL foldables in the following segment.

TCL Ultra Flex is a traditional-looking foldable smartphone that comes with a hinge design similar to the Royole Flexpai, one of the first foldable phones to ever launch in the market. Although the hinge of the Ultra Flex does not look appealing, it does allow the device to fold both ways – inward and outward.

It comes with an 8-inch PLP AMOLED display that is protected by the hinge from not breaking or cracking. Furthermore, as the device can fold both ways, it allows users to use the device in many different ways — tent mode for easy collaboration or in a standard tablet mode with support for a stylus. You can check out a real-world image of the TCL Ultra Flex (via Android Central) attached below.

Next comes the TCL Fold n Roll that, yes, you guessed it, unfolds like a Galaxy Z Fold device and then rolls out a hidden screen to become an 8.8-inch tablet-like device from a 7-inch device. It is similar to TCL’s previous Fold and Slide device that was showcased at DTC last year. However, it is a bit more compact than the previous one.

Coming to the mechanism, the TCL Fold n Roll looks like a Galaxy Z Fold when it is closed. However, when you open it and press a button on the side of the device, it rolls out extra screen real estate that was hidden underneath. Now, as MrMobile points out, this TCL device works well when the rolling mechanism works. However, at the time of testing, the YouTuber mentioned that the mechanism was finicky and would only work partly.

It is also worth mentioning that the TCL Fold n Roll has more prominent display creases as compared to the Ultra Flex. Moreover, it does not support a stylus and looks like an unfinished device when it is fully unfolded and rolled out.