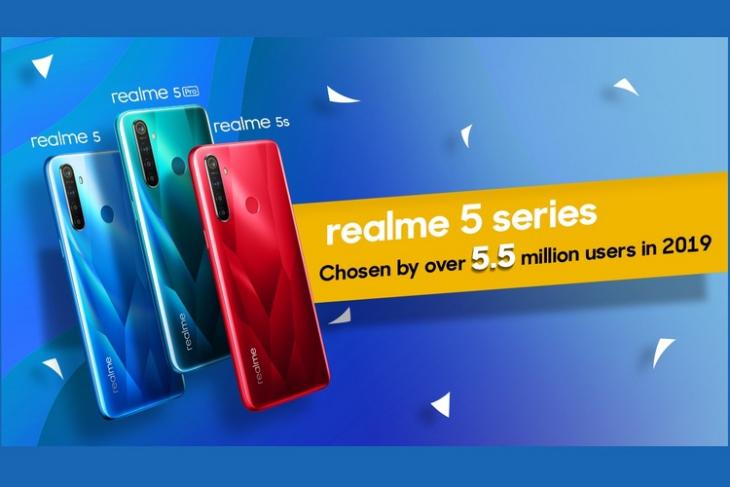 Realme claims to have sold more than 5.5 million units of its 5-series smartphones globally. The company’s CEO, Madhav Sheth, announced the news on Twitter, saying the figure represents combined sales of the Realme 5, Realme 5 Pro and Realme 5s smartphones. While the Realme 5 and Realme 5 Pro were originally unveiled last August in India, the latter has since been launched in China as the Realme Q. The company has also since introduced the slightly upgraded Realme 5s with a 48MP primary camera instead of the 12MP unit found on the standard Realme 5.

In addition to the aforementioned models, the company is also rumored to be working on a so-called Realme 5i (model number RMX2030) that’s expected to be launched in the coming months. It will be the fourth installment in the lineup, but it’s not immediately clear how that device will be priced, or how it will differ from the existing models. However, given that the Realme 5-series brought the quad-camera trend mainstream last year, it will be surprising if the new device doesn’t also rock four rear-cameras like the other devices in the lineup.

We had introduced the #real5Quad in August 2019 and since then we have more than 5.5 million+ satisfied users globally for #realme5, #realme5Pro & #realme5s

The series established Quad Camera as a mainstream feature in 2019.
RT if you are a happy #realme5series user. pic.twitter.com/gNO6H2mX0c

In just over a year and a half of its launch, Realme has become a brand to be reckoned with in India and beyond. Originally perceived as an online-only brand to counter the popularity of Xiaomi in India, the brand has since gone international, with Realme-branded devices now also available in China. Meanwhile, Realme is now the forth biggest player in the Indian smartphone market with sales of 6.7 million units in the third quarter of 2019, according to IDC.