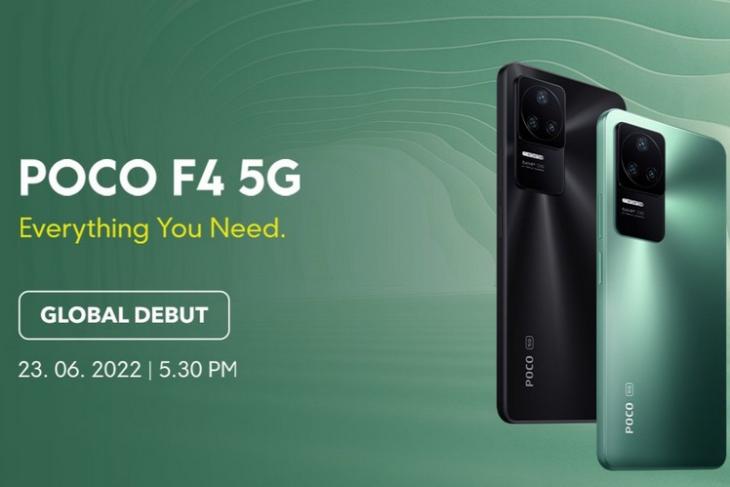 Earlier this month, Poco confirmed to launch a new F-series smartphone in the Indian and global markets soon. Although the company did not provide much detail at the time, it has now announced the launch date of the Poco F4 5G. Other than the F4 5G, Poco is going to launch another device in the global market. Check out the details below to find out more!

Following several rumors, Poco today took to Twitter to announce the global debut of the Poco F4 5G. The device will launch in India on June 23, 2022, in a dedicated virtual event, which you can catch live on YouTube and Poco’s other official channels at 5:30 PM IST. You can check out the announcement tweet right below.

Furthermore, we can see the Flipkart logo at the top left corner of the teaser image, confirming that the Poco F4 5G will be exclusive to the Indian e-commerce platform.

Other than the Poco F4 5G, Poco has confirmed the launch of another device for the global market. Dubbed the Poco X4 GT, the device is expected to be a re-branded Redmi Note 11T Pro, which launched in China late last month. Hence, it is expected to come with the MediaTek Dimensity 8100 SoC, up to 8GB of LPDDR5 RAM, a 4,400mAH battery, and 64MP triple cameras.

Coming to the Poco F4 5G, the company has been teasing some of its key features on social media over the past week. Moreover, the rumor mill and the design teasers suggest that the device will be a re-branded Redmi K40S, which launched in China alongside Redmi K50 series earlier this year. The device is expected to sport a 6.67-inch Full HD+ AMOLED display with support for a 120Hz refresh rate.

Poco has already confirmed that the F4 5G would be powered by the Snapdragon 870 chipset. It will include up to 12GB of LPDDR5 RAM and 256GB of UFS 3.1 storage. Furthermore, the device is expected to pack a 4,500mAh battery unit with 67W fast charging support.

Coming to the camera department, the Poco F4 5G is rumored to come with a triple rear camera setup, including a primary 64MP lens with OIS (confirmed), an 8MP ultra-wide lens with a 119-degree FOV, and a 2MP macro sensor. It is also expected to feature a 20MP selfie shooter at the front.

Other than these, the Poco F4 5G is slated to come with a side-mounted fingerprint sensor, dual speakers with Dolby Atmos support, and support for 5G networks and Wi-Fi 6 and Bluetooth 5.1. It will likely run Android 12-based MIUI 13 custom skin out of the box.

Now, although regarding the price has been revealed by Poco, reports suggest that the device will be available in a single variant and will be priced somewhere around $459 (~Rs 35,839) in the global market. In India, the Poco F4 5G will be priced at Rs 26,999, as per leaks. However, it is worth noting that the price has not been confirmed yet. So we suggest you take this information with a pinch of salt. Also, let us know your thoughts about the Poco F4 5G in the comments below.