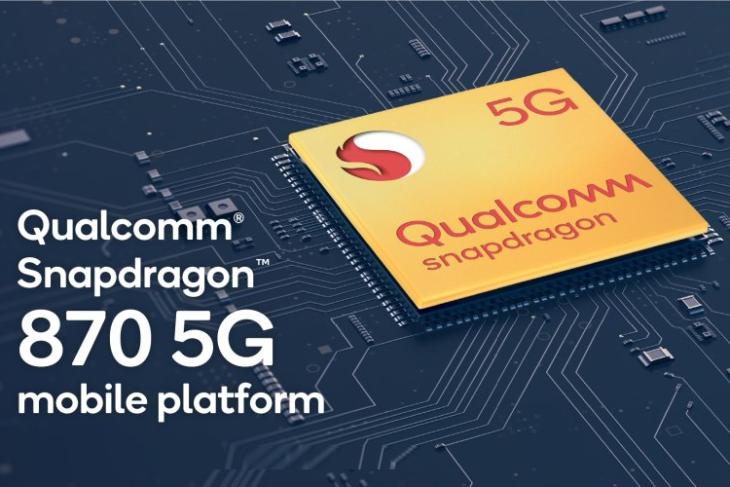 Qualcomm unveiled the flagship Snapdragon 888 5G chipset earlier last month. It has been built on the 5nm process node and already powers devices like the Mi 11, Galaxy S21 series, and more. Now, Qualcomm is giving phone makers the arsenal to launch more affordable flagship phones in 2021. It has announced the Snapdragon 870 5G chipset today, which is essentially a minor upgrade over the Snapdragon 865.

How is Snapdragon 870 different from the Snapdragon 865+ you ask? Qualcomm has merely increased the clock speed of the prime core by 0.1GHz or 3%. The chipset still includes Kryo 585 CPU based on ARM Cortex-A77 cores. Also, it is built on the 7nm process node.

The Snapdragon 870 SoC includes a Kryo 585 prime core clocked at 3.2GHz, 3x performance cores clocked at 2.4GHz, and 4x efficiency cores clocked at 1.8GHz. The rest of the cores offer the same frequency as the previous-gen Snapdragon 865, except for the prime one. All of the remaining specs remain unchanged, including the Adreno 650 GPU, Spectra 480 ISP, Snapdragon X55 5G modem, and more.

There’s a minor upgrade on the connectivity front as well. Though Snapdragon 870 comes equipped with the FastConnect 6800 system, the same as Snapdragon 865, it now supports Bluetooth 5.2. It also supports Wi-Fi 6, which is a downgrade from Wi-Fi 6E support found aboard the Snapdragon 865+ chipset.

“Building upon the success of Snapdragon 865 and 865+, the new Snapdragon 870 was designed to address OEM and mobile industry requirements,” mentioned Kedar Kondap, VP, product management, Qualcomm Technologies, Inc in the official blog post. Well-known OEM partners, including Motorola, iQOO, OnePlus, OPPO, and Xiaomi, will launch phones powered by this chipset in the first quarter of 2021.

The sole purpose behind the launch of Snapdragon 870 is that phone makers will now be able to pitch their affordable flagships as powered by this year’s chipset. It enables them to get rid of the stigma attached with the use of last year’s Snapdragon 865/ 865+ on budget flagships in the sub-Rs. 35,000 price bracket in 2021.

We already know that one of the Redmi K40 models, Motorola Edge S (launching next week), and the rumored OnePlus 9 Lite will be powered by this chipset. So, are you all excited for the launch of many Snapdragon 870 phones this year?