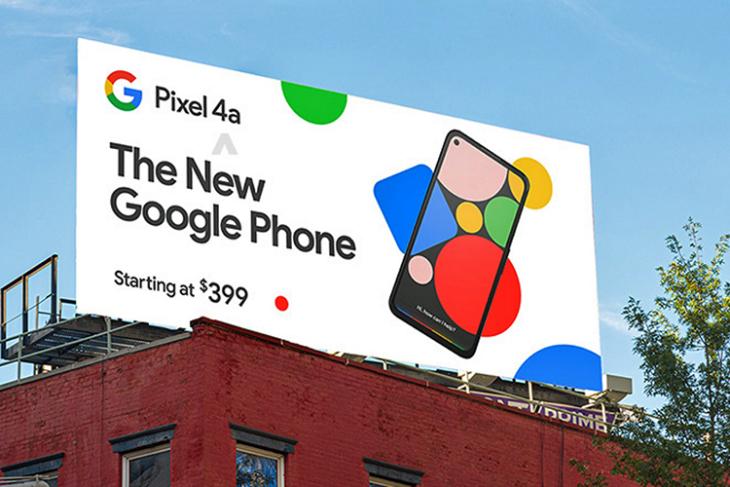 The leaks for Google Pixel 4a, the upcoming mid-range smartphone from Google are incoming from multiple sources at this point and they show no signs of slowing down. The latest one comes from reputable leakster Evan Blass, confirming the design and starting price of the handset.

Earlier today, Evan Blass had tweeted a set of images of what looks like the official promotional billboards for the Pixel 4a. While the billboard appears to be a mockup, the promotional images present in them seem legit.

Notably, the images comply with all the previous leaks and speculations we heard so far regarding the Pixel 4a. The key takeaway from the billboard leak is undoubtedly the price of Pixel 4a’s base variant. According to Blass, the device will start at $399. In fact, that is the same starting price as the Pixel 3a when it launched last May.

An allegedly leaked hands-on video that has been circulating on the media for the past two days revealed that the Pixel 4a will come with a 5.81-inch Full HD+ display with 2340 x 1080 pixel resolution and 60Hz refresh rate.

Pixel 4a is expected to pack Snapdragon 730 chipset with 6GB of RAM and 64GB of internal storage. The handset is tipped to come with a 3080 mAh battery that charges through a USB-C port. Moreover, it is said to retain the headphone jack.

Google has canceled the physical event of Google I/O 2020 in light of the ongoing coronavirus epidemic where it was expected to announce the Pixel 4a. Hence, we are left with no choice other than hopefully waiting for Google to officially announce the launch date sometime in the weeks to come.