OnePlus sure knows how to create some hype around their new devices. Be it revealing certain unique aspects of their upcoming smartphone, like the notch in OnePlus 6’s case or asking fans to help create an ad film, the company never shies away from trying new ways to drum up excitement.

Pulling another such trick out of the hat, the company has now released an early hands-on video of the OnePlus 6, which is set to be unveiled on May 17. But before you rush to tap the play button on the video below, be warned you won’t actually be able to catch a glimpse of the OnePlus 6.

Even though the OnePlus 6 units shown in the video are blurred, there are few tidbits of new information we can extract from the video which was shot at the Open Ears Forum: OxygenOS event in San Francisco where some fans got to see the phone.

First off, multiple people in the video can be seen praising the unique finish on the device’s rear panel, which leaves the doors open for two possibilities. First, OnePlus could be bringing back the classic Sandstone finish, as CEO Pete Lau recently indicated that OnePlus is going for a different ‘interpretation of a familiar material.’

Or the praises could be for unique material used to coat the OnePlus – a five-layer Nanotech coating. Moreover, another person in the video can clearly be heard saying that the device is not slippery, which suggests that the OnePlus 6’s glass back may come with a slightly more grippy finish, with one user even wondering whether it is glass or not.

Additionally, the OnePlus 6 will come in a white finish too, as is clear from the video. Interestingly, the people in the video seem to be particularly enamored by the white version, praising its finish the most.

In addition to the regular OnePlus 6 variants, the company has also confirmed that a limited edition version called the OnePlus 6 x Marvel Avengers Limited Edition will also be launched, and that it will come with a unique textured rear panel.

You Can Now Get Android Pie-based MIUI 10 for OnePlus 6, OnePlus 6T
Partner Content 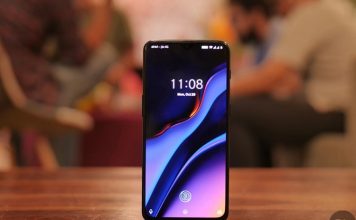 OnePlus has started rolling out OxygenOS 10.3.5 for the OnePlus 6 and OnePlus 6T. The incoming update optimizes RAM management on the two devices...
Kishalaya Kundu - Jul 31, 2020

After releasing an open beta of Android 10 for the OnePlus 6 and 6T late last month, the Chinese smartphone company has now started...
Kishalaya Kundu - Nov 2, 2019

OnePlus is rushing to bring the latest Android experiences to more of its devices. It has already rolled out the stable Android 10-based OxygenOS...
Anmol Sachdeva - Oct 19, 2019

Most Android Phones With Face Unlock Can be Tricked by 3D Model Of Your...

Ever since the arrival of face unlock as an authentication measure, questions have been raised regarding its reliability, especially when we have seen devices...
Nadeem Sarwar - Dec 17, 2018

OnePlus 6 and OnePlus 6T are backed by OxygenOS, which is considered to be the most snappy and feature-rich Android skin, but there's a...
Anmol Sachdeva - Dec 14, 2018