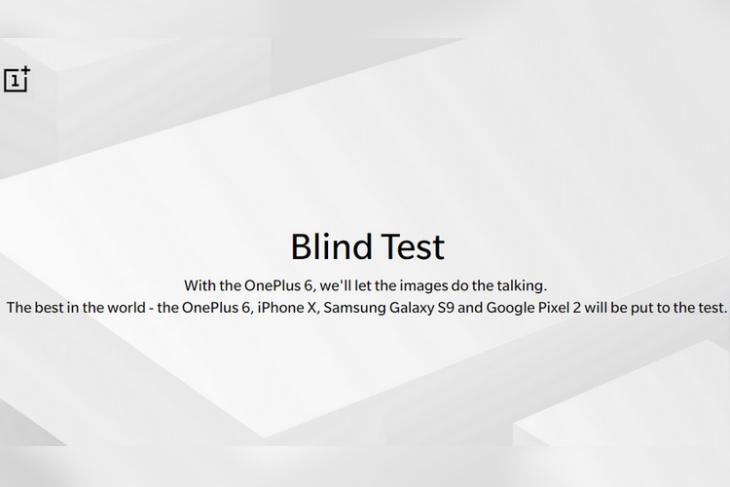 By now, we already know a lot about the OnePlus 6 through leaks, teasers and official sources. Be it the presence of a notch on the upcoming flagship killer, pricing, the material used to make its rear panel, an Avengers-themed variant, or the device’s core specs which were confirmed by none other than the company’s chief, Pete Lau.

But being the latest OnePlus flagship, it will surely pack a capable camera that can gp up against the best out there. And to prove this, it’s inviting people to vote in a blind test involving the OnePlus 6 and three venerable opponents- the Google Pixel 2, iPhone X and the Samsung Galaxy S9.

On the official OnePlus India website, the company has started a blind test, claiming that ‘With the OnePlus 6, we’ll let the images do the talking’. As part of the test, OnePlus has posted photos clicked by the OnePlus 6, Google Pixel 2, iPhone X and the Galaxy S9 captured in four different lighting conditions on the website. The four categories are Architecture, Low Light, Low Light Portrait and daylight Portrait.

The images in each category shot by the four smartphones are placed side by side, with the goal being highlighting the difference in their overall visual quality. But being a blind test, it is not known which photo was captured by the OnePlus 6 or any of the devices it is being compared with.

OnePlus has asked fans and followers to vote for the image which they think is the best in each category. The blind test is undoubtedly a bold move, especially when it comes to competing against the likes of the Pixel 2, whose camera performance has set new benchmarks.

Aside from the blind test, OnePlus is also running a lucky draw and an invite scheme whose winners will stand a chance to win the OnePlus 6. For complete details, visit the official OnePlus website.