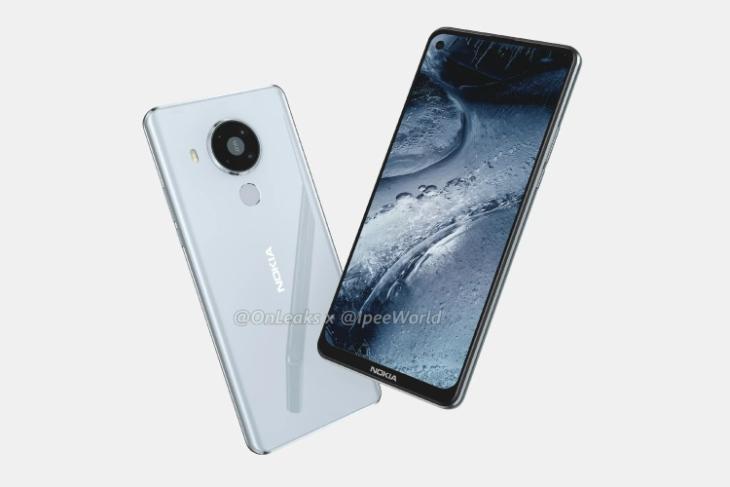 HMD Global recently launched its newest budget smartphones, Nokia 2.4 and Nokia 3.4, at a virtual event. While we also expected the Finnish giant to show off the Nokia 7.3, the rumored 5G phone was a no show. Merely two days after the event, reputable tipster OnLeaks (via IPEEWorld) has now shared CAD renders for the Nokia 7.3.

The Nokia 7.3 CAD renders give us a closer look at the device from all angles. Right off the bat, you can see that its design is really similar to the Nokia 7.2 from last year. You have a circular camera module, now housing four sensors instead of three, alongside a fingerprint sensor on the rear.

The quad-camera setup will be helmed by a 48MP primary sensor – the same as its predecessor, as per the report. We have no information on the rest of the sensors just yet. Turning our attention to the front, Nokia 7.3 will likely feature a 6.5-inch Full-HD+ LCD display with a punch-hole cutout at the top left. A 24MP selfie sensor will be baked in this punch-hole. You also have a slightly bigger chin with the ‘Nokia’ branding here.

In addition, you will find the power and volume buttons on the right edge. There isn’t a dedicated Google Assistant button on the left edge this time around. The bottom edge will include the USB Type-C port whereas the 3.5mm headphone jack is present at the top, claims the report. The body is made out of plastic and not glass, something which may not be evident from the renders.

As for the specs, Nokia 7.3 is expected to HMD Global’s second 5G-enabled phone. It will most likely be powered by the Snapdragon 690 SoC, along with a 4,000 mAh battery with 18W fast-charging support. It was initially rumored to launch at IFA 2020 but HMD Global seems to have delayed its release. This means it could arrive as the first Nokia phone running Android 11 out-of-the-box.

HMD Global is also known to be working on the Nokia 9.3 PureView, so we can expect the Nokia 7.3 to make its debut alongside this flagship before the end of this year. Stay tuned for more updates in the coming weeks.