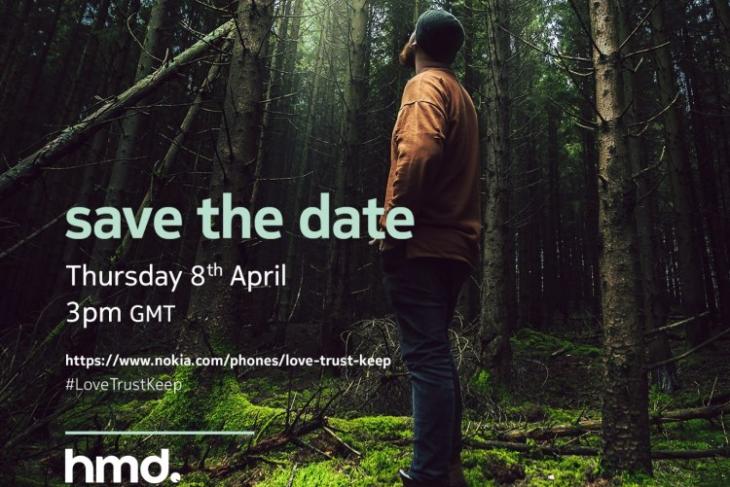 While smartphone makers like Xiaomi and Samsung are busy launching phones left and right, Nokia has been rather silent for the past six-odd months. HMD Global has only brought the Nokia 3.4 and Nokia 5.4, launched globally last year, to India earlier in February. But now, the company is gearing up to launch new Nokia smartphones.

HMD Global has scheduled a launch event for 8th April. The company has set up a micro-site with a ‘Save the Date’ invite. It further mentions a ‘#LoveTrustKeep’ hashtag and pictures a man looking at pine trees amidst the forest. The micro-site does not reveal anything about the upcoming devices.

If we were to speculate, we can expect HMD Global to take the wraps off the rumored Nokia 7.3/ Nokia 7.4 and Nokia 6.3/ Nokia 6.4 at the event. Recently we’ve also been hearing chatter about Nokia-branded gaming phones. The company could also unveil the new G-series with the Nokia G10 next month.

So, what do we know about the upcoming smartphones? Nokia 7.3 or Nokia 7.4, the naming scheme of HMD’s portfolio is horrid at the moment, has leaked already. It is expected to sport a 6.5-inch Full-HD+ LCD Puredisplay, circular camera setup with a 48MP primary sensor, and a 24MP selfie camera. You will also find an ultra-wide, a macro, and a customary depth sensor onboard as well. A 5G-enabled Snapdragon 690 chipset and a measly 4,000mAh battery will power this device, as per OnLeaks.

Nokia 6.4, on the other hand, will look and feel pretty much the same with a circular camera module on the rear. A waterdrop notch will, however, replace the punch-hole cutout on the front. You will also find a side-mounted fingerprint scanner onboard here.

Both of these phones sound less than impressive, but the Nokia G10 that might spark some interest among fanboys. It will be the company’s first gaming smartphone. It will include a 120Hz display, Snapdragon 775 chipset (successor to Snapdragon 765 that’s found aboard the OnePlus Nord), and possibly, an impressive 108MP camera system. So, does this spark your interest in upcoming Nokia phones? Share your thoughts with us down in the comments section.