Google just released the first developer preview for Android 11 and while it’s very early days right now, the update does come with its fair share of new features and changes. So, if you’re wondering what Android 11 might have in store for you when it launches later this year, here are 12 new Android 11 features:

Chat bubbles first appeared back with Android Q beta versions, but Google decided to remove them in the stable release for Android 10. With Android R’s first dev beta, they have made a reappearance with the same concept. Basically, with chat bubbles, messaging apps can show conversations in floating bubbles, similar to Facebook Messenger’s Chat Heads feature that a lot of people like to use.

Theoretically, chat bubbles can be used by any messaging app, but as of right now, only the Google Messages and Gmail apps are using the feature. 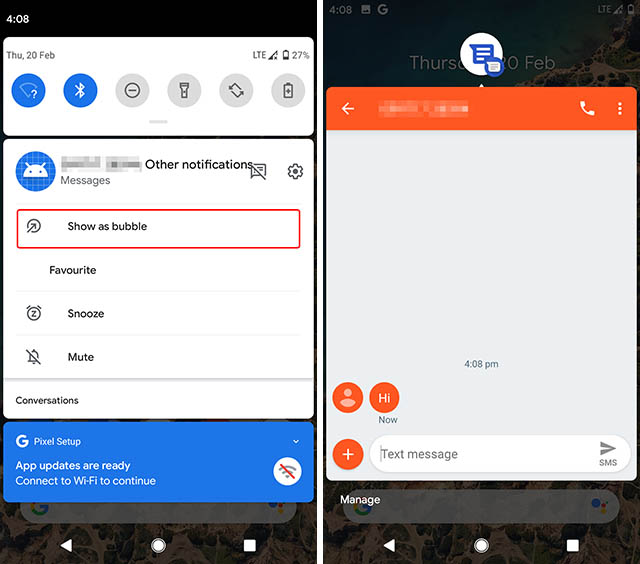 You can open a chat bubble for a conversation by simply long-pressing on a message notification and tapping on ‘Show in chat bubble’. You can then reply to conversations in a floating window similar to Messenger’s implementation, and it even has support for Smart Reply.

With Android 11, Google is also trying to make it easier for users to find their conversation-related notifications in the sea of information that is the notification shade. Android 11 automatically brings together all message threads into a handy ‘Conversations’ section of the notification panel that’s also kept right on the top.

If you’re one of the many people that often find themselves replying to messages straight from the notification shade, Android 11 brings another interesting feature to the mix for you. The notification panel now supports copy-paste support, so you can copy an image from, say, Google Chrome, and paste it into the reply section of a notification to send it across. This means you may no longer need to open the messaging app just because you wanted to attach a picture to your reply. That’s definitely handy.

Google has been making Android more secure with each update. Last year, with Android 10, the company overhauled how location permissions are granted to apps, and gave us slightly more granular control over an app’s access to our location data.

With Android 11, Google has made location permissions even more strict, and added granular control over more permissions such as camera and microphone. 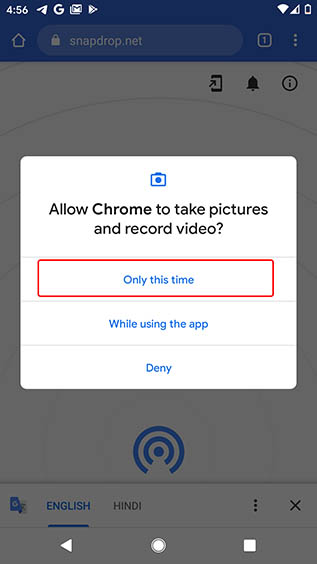 In Android R, if an app asks for location access, you get a new ‘Only this time’ option that will give the app access to your location for just that one time. There’s also no ‘Always allow’ option now, which means apps that need access to location all the time will have to get approval from Google.

Also, you can now allow an app a single-time access pass of sorts to your camera and microphone to ensure it doesn’t try to access either of those things without your knowledge. That’s definitely a relief, especially with the rise of spyware in recent times.

Another feature that first popped up last year with Android Q only to later be removed before the stable release of Android 10 — screen recorder is back this time, with an improved UI.

In Android 11, you can access the built-in screen recorder functionality from the Quick Settings panel. Tapping on this starts a 3 second timer before the screen starts being recorded. There’s also a handy notification to stop, pause, or cancel the screen record. 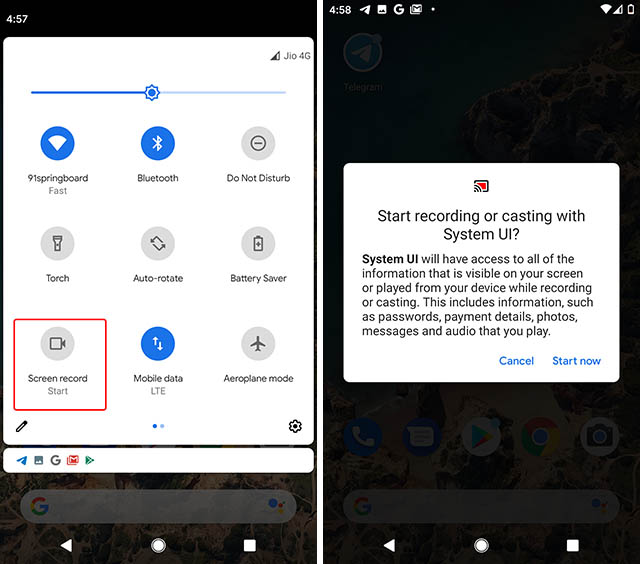 As of now, there are no settings to dig into for changing the resolution, recording internal audio, or setting an orientation for the screen recordings, but hopefully we will get to see those features added in future updates.

5. Improved Do Not Disturb

Android 11 also brings improvements to Do Not Disturb — mostly in that it gives better support for managing DND exceptions which is something I am pretty psyched about. As you probably know, with Android 10, the DND menu already featured exceptions, but now there are better, more organised categories like People, Apps, and Alerts. 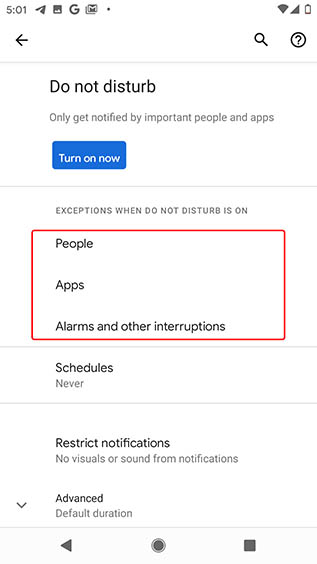 So you can set do not disturb exceptions for particular callers, specific apps, or just allow alarms and reminders to ring regardless of the DND status on your phone. That’s pretty great.

Last year, Google finally brought a native, system-wide dark mode to Android 10, and this year, it seems the company is simply improving the feature, specifically by adding the option to schedule dark mode to turn on and off automatically. 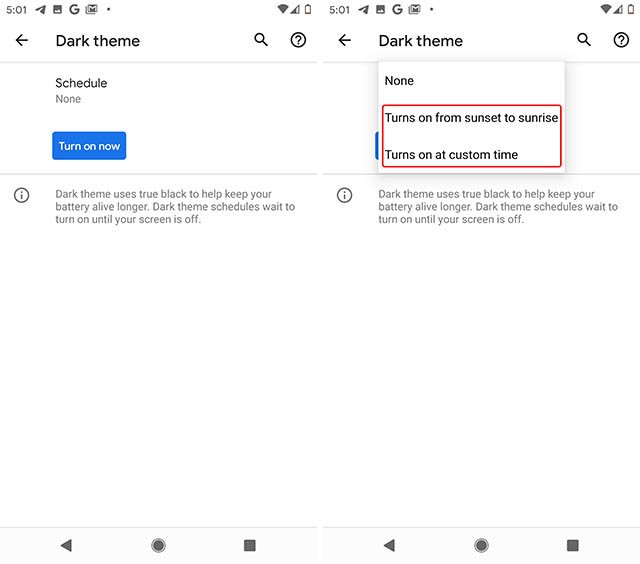 This schedule can either work based on sunset and sunrise times in your region, or, if you prefer, you can set a custom time for dark mode to be enabled. This is something I really wanted on Android because using the dark mode all day long feels just a little annoying to me, but using it post sunset is a lot better, especially when outside.

This is another feature that was available in the Android 10 betas as well, only to be removed later. With Android 11’s first developer preview, you can once again pin apps to the top in the share sheet. That means you can ensure that apps you use most will stay on top and not get replaced by random apps just because you used them once and now can’t get rid of. 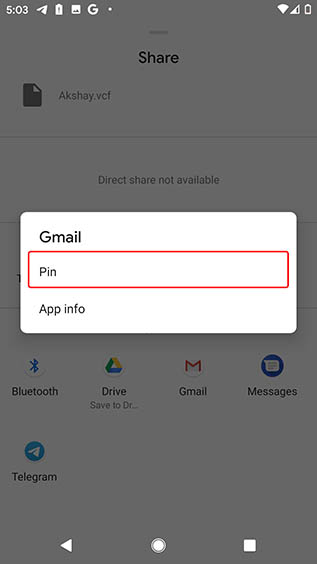 One of the biggest complaints a lot of people have with Android, and one that we even talked about in our video on the Android 11 features we want, is the fact that turning on Airplane mode turns off Bluetooth as well.

Fortunately, with Android 11 that’s no longer the case. So the next time you board your flight with your headphones on, you can enable Airplane mode without having to turn Bluetooth on again and waiting for your headphones to reconnect.

While most screen protectors don’t usually hinder with the day-to-day operation of your smartphone, some tougher tempered glasses can actually make the display not respond to light touches with ease. Aiming to solve that problem (at least for Pixel 4 users), Google has added an option to increase touch sensitivity on the Pixel 4.

You can enable this feature by heading into Display settings, scrolling down all the way to the bottom, and tapping on Advanced.

Android 11 also adds a brand new Soli gesture that allows users to employ a simple hand gesture to play/ pause music. Since Soli doesn’t work here in India, we haven’t tested this feature out, but the feature states that users can pause and resume music by just “tapping the air above the phone” which sounds incredibly cool, albeit a recipe for hit-and-miss disasters.

10. Other Changes and Features

Apart from all of that, Android 11 brings a bunch of features and changes. Developer options now only show Bluetooth codecs that are actually supported by the connected Bluetooth headphones. There’s a new overlay that displays the screen’s refresh rate (don’t confuse it with an FPS meter, it’s not that), and there’s support for more kinds of displays such as waterfall displays and folding ones.

Moreover, Android 11 claims to bring 5G and connectivity improvements, a scrolling screenshot feature that’s currently hidden, and a hidden Battery Share menu that hints that the upcoming Pixel 5 might come with support for reverse wireless charging.

Inside the Android 11 settings is a particularly interesting, albeit hidden, option called ‘Battery Share’. According to the description of the feature, it seems to be something along the lines of reverse wireless charging. The feature pops up when searching for ‘Battery’ in the Settings app on Android 11. 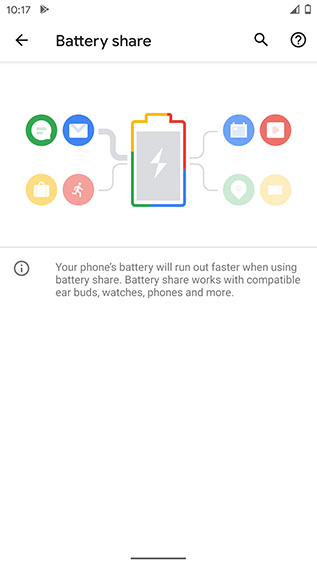 Since none of the Pixel phones so far have the hardware required for wireless power share, this may very well be a feature Google is planning to bring with the Pixel 5 which had its first render leak a few days back.

Another hidden Android 11 feature that was first spotted by 9to5Google, Gesture Settings seems to be a work in progress, but it seems to be aimed at solving the issue of swiping to open the hamburger menu inside apps. 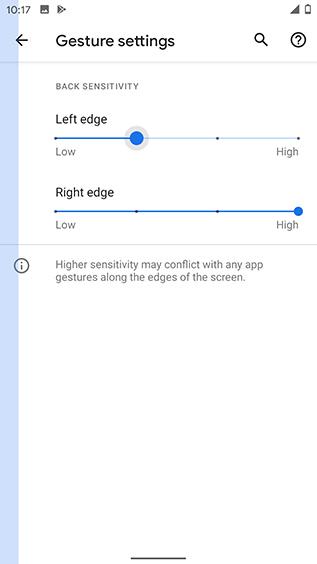 Under Gesture Settings, users will be able to adjust the back sensitivity for both the left and right edge individually, so you can theoretically reduce the sensitivity for the left side, making it easier to open app drawers with a swipe. Hopefully this feature will get more fleshed out in the coming developer previews.

Even though the software Google has released right now is the first Developer Preview for Android 11, which by definition means that it’s very early days to tell what new features Android 11 may or may not bring when it finally comes out; it’s still interesting to see what Google has been working on. I’m quite excited about other developer updates to roll out so we can see which features make the cut as things progress, and what new things are added into the mix. We should also get to know more about Google’s plans for Android 11 at Google I/O in May.

Meanwhile, we are digging through Android 11 to see if we can find more features, so stay tuned for more updates. Also, if you’re interested in testing out Android 11 for yourself, here is how to install Android 11 DP 1 on your Pixel smartphone.