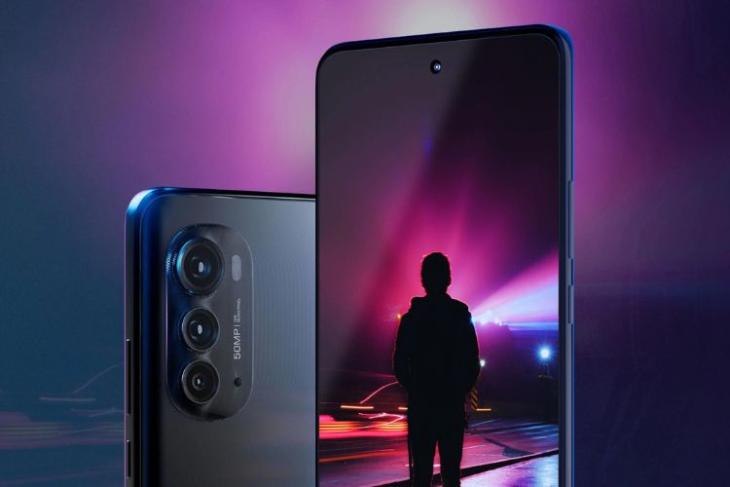 Motorola’s launch pattern isn’t unknown; it launches a lot of phones, mostly, affordable ones. But, there’s a fair share of flagships and mid-rangers too. After introducing the high-end Moto Razr 2022 and the Moto X30 Pro, the company has now launched the new mid-ranger, the Motorola Edge (2022). And this is the first one to come with the MediaTek Dimensity 1050 chipset, introduced a few months ago. Have a look at what all it features.

The Motorola Edge (2022) doesn’t bring forward a new look and highly resembles any other Moto G phone. There are vertically-arranged rear cameras and a center-placed punch-hole screen. It comes in a Mineral Gray color.

The 6.6-inch screen is OLED in nature and supports a 144Hz refresh rate, which still hasn’t become mainstream these days. It also supports a Full HD+ screen resolution, HDR10+, a 20:9 aspect ratio, and a 10-bit DCI-P3 color gamut.

It has the MediaTek Dimensity 1050 chipset onboard, which is the first from Motorola to support mmWave 5G and Sub-6GHz 5G bands to deliver up to 53% faster 5G experience. There’s support for up to 8GB of RAM and 256GB of storage.

The new Motorola Edge has a highly used camera setup that includes a 50MP main camera with OIS and Omni PDAF, a 13MP ultra-wide lens that also doubles as a macro camera, and a 2MP depth sensor. There’s a 32MP front snapper too. You get to try features like Dual Capture, Instant Night Vision, Super Slow Motion, and more.

The phone gets its juice from a decent enough 5,000mAh battery that supports 30W TurboPower fast charging, 15W wireless charging, and 5W reverse charging. It is said to last up to 2 days on a single charge. The device runs near-stock Android 12.

Other noteworthy details include support for an in-display fingerprint scanner, Dolby Atmos, 2 stereo speakers, USB Type-C, NFC support, and an IP52 rating. The 3.5mm audio jack is missing, though.

The Motorola Edge (2022) will be available for $499 (~ Rs 39,700) in the US for a limited time and will be initially sold via T-Mobile in the coming weeks. It will then be available via carriers like Verizon, AT&T, Spectrum Mobile, US Cellular, and Visible.

Once the limited-period offer ends, it will retail at $599 (~ Rs 47,700). There’s no word on its availability in other regions, including India.