Skip to content
Home News MIUI 13 Screenshots Leak Ahead of Release; Give Us First Look at New Icons & Widgets 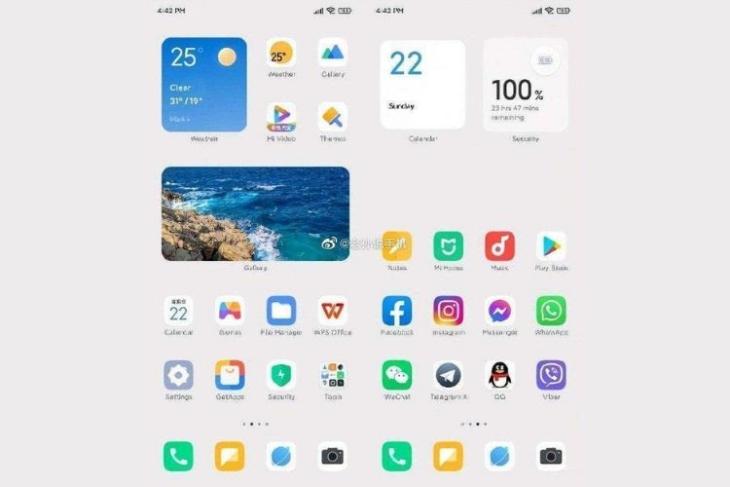 Xiaomi has been working on its upcoming MIUI skin based on Android 12, and it is confirmed to arrive later this year. Dubbed as MIUI 13, the new Android skin is supposed to bring several new features and upgrades for Xiaomi users. We have already seen a glimpse of MIUI 13 earlier this year. Now, more screenshots showcasing the MIUI 13 design changes for Xiaomi devices have been spotted on Chinese social channels.

With MIUI 13, Xiaomi is aiming to bring some significant changes to its devices this year. So, the leaked screenshots show the new home screen, containing dynamic, floating widgets, similar to what Apple introduced with iOS 14 earlier last year. There will also be a new and customized notification management system in MIUI 13.

Moreover, the upcoming update is said to bring an improved battery management system, smoother animations, new themes, and better privacy. Plus, with MIUI 13, users will be able to customize their always-on display (AOD) to show which notifications appear while AOD has been turned on. You can also expect changes to the quick settings panel, as you can see below:

Furthermore, the company will reportedly add support for virtual RAM expansion to all its devices that will support MIUI 13. This means that devices with MIUI 13 will be able to assign a certain amount of additional RAM from their internal memory to improve the user experience.

Now, coming to the compatible devices, the MIUI 13 will not run on every Xiaomi device following the launch. However, the company is aiming to release the firmware via an OTA update for most of its devices, including Poco devices, Redmi smartphones, and its flagship Xiaomi series.

So, below are the devices that will reportedly receive the MIUI 13 update once it releases later this year.

So, the above models from Poco, Xiaomi, and Redmi devices will receive the MIUI 13 update. However, as per reports, Xiaomi might not ship its upcoming flagship series, the Xiaomi 12 series, with the new skin initially. The company might continue to refine the OS before releasing it in the market.

So, what do you think about MIUI 13? Is your Xiaomi device going to receive the upcoming update? Let us know in the comments below.