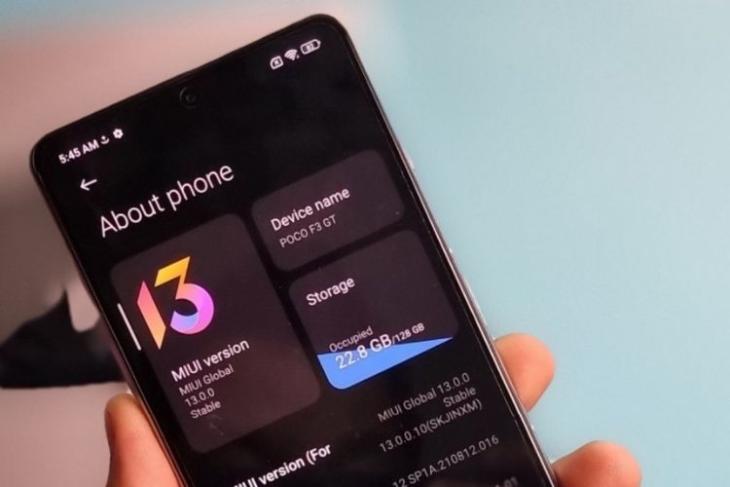 After announcing its latest Android 12-based MIUI 13 update in India yesterday, Xiaomi has now started rolling out the stable version of the skin for Poco F3 GT users in India. The Poco smartphone, which launched in India in July last year, is one of the first smartphones to get the stable MIUI 13 update in India. Let’s take a look at the details.

Several users on Twitter have shared that their Poco F3 GT has started getting the stable version of the Android 12-based MIUI 13 update in India today. The update, as per a user, comes as a 160MB package and adds many new features to the device, including cleaner UI and various optimizations in the RAM, chipset, and battery department.

The update with version number MIUI 13.0.0.10 (SKJINXM) for Poco F3 GT also contains the January 2022 security patch. You can check out some images showcasing a Poco F3 GT device running the latest MIUI 13 update in the tweet below, thanks to Twitter user Ravi Kumar.

To recall MIUI 13 brings forth a number of performance improvements in the form of Liquid Storage, RAM optimization, Process Priority optimization, Smart Balance, and more. It also comes with new dynamic wallpapers and more visual changes.

As for the Poco F3 GT, it is a gaming-focused phone and comes with the Dimensity 1200 chipset, which was released as a flagship-grade chipset in early 2021. The device packs up to 8GB of LPDDR5 RAM and up to 256GB of UFS 3.1 storage. Other than these, it has a 6.67-inch 120Hz AMOLED display, 64MP triple rear cameras, 67W fast charging support, pop-up gaming triggers, Dolby Atmos audio, and more.

So, if you are a Poco F3 GT user, you can head to the Settings -> System Updates to check whether the update is available. And if you use any other Xiaomi device, you can check out our story on the list of MIUI 13 compatible devices to know whether you will get the latest update or not. It remains to be seen when will the other Poco devices start getting the MIUI 13 update in India. Do let us know if you have received the update in the comments section below!