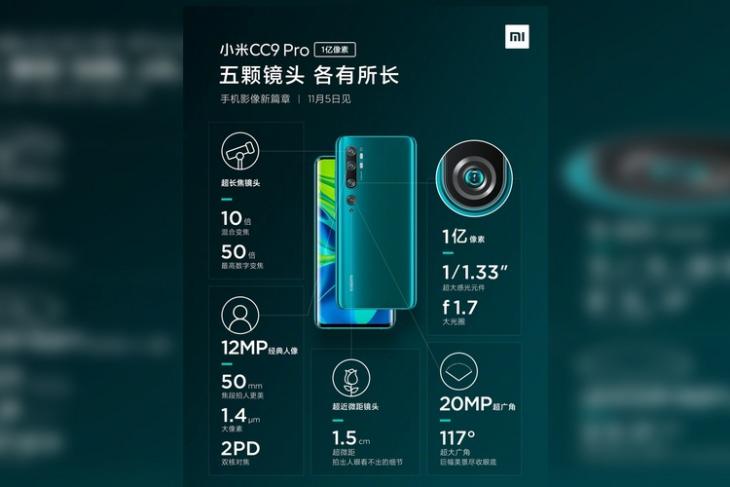 Following the launch of the CC9, CC9e and CC9 Meitu Custom Edition smartphones in China earlier this year, Xiaomi is all set to unveil the Mi CC9 Pro next month. While earlier reports had leaked most of the tech specs of the upcoming device, Xiaomi’s founder and CEO, Lei Jun, has now officially confirmed some of those leaks through an official post on Weibo. The company has also confirmed that the phone will be unveiled at a press even on November 5th, where the company is also expected to launch the Mi TV 5 series and an all-new smartwatch.

As can be seen in the official teaser posted by Xiaomi on the Chinese social media site, the device will ship with a five-camera setup on the back, led by Samsung’s 108MP ISOCELL Bright HMX sensor. One of the additional sensors will also apparently be paired with a telephoto lens that the company claims will offer up to 5x optical zoom. As can be seen in the image above, all the five cameras are aligned vertically to the left, but the camera bump only houses three of the sensors, while the other two are positioned below the module.

Meanwhile, the leaks from earlier this month claimed that the device will ship with a 6.4-inch Full HD+ AMOLED display with a teardrop notch and an in-display fingerprint scanner. It will also be powered by the Snapdrgon 730G chipset, and will be offered with up to 6GB of RAM and 128GB of storage. The device will also apparently carry a 4,000mAh battery, sport a 32MP camera upfront and run Android 10 out-of-the-box. It is rumored to be priced starting at 2,599 yuan (around Rs. 26,000).