Skip to content
Home News Mi Band 7 vs Mi Band 6: Should You Upgrade? 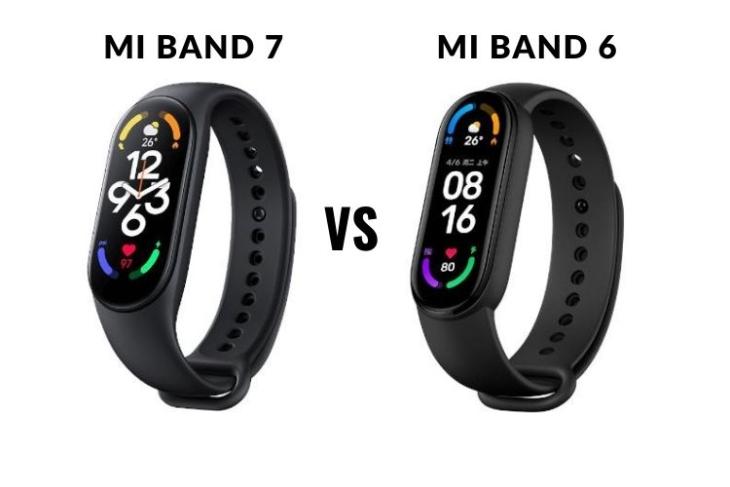 At its launch event in China earlier today, Xiaomi launched the Mi Band 7 alongside the Redmi Note 11T series. The Mi Band 7 brings some amazing new features as well as quality-of-life additions to Xiaomi’s popular fitness tracker. In this article, we have compared the latest Mi Band 7 against the company’s previous-gen fitness band, Mi Band 6. If you are a Mi Band 6 user wondering whether you should upgrade to the Band 7, read on to find out. Let’s compare the Mi Band 6 vs Mi Band 7 below.

In terms of the form factor, Xiaomi is sticking to its tried-and-tested Mi Band design with rounded edges on the Mi Band 7. However, you get a larger 1.62-inch AMOLED display this time around, a 0.06-inch increase compared to the 1.56-inch display on its predecessor.

Yeah, the futuristic wraparound display leak we saw last year has not panned out yet. Having said that, using the same pill-shaped design isn’t a negative, though. It offers the compact wearable experience everyone expects from a fitness band in the Mi Band lineup.

Every year, Xiaomi adds new sports modes to its Mi Bands. While the Mi Band 6 offers 30 sports modes, the company has now baked 120 sports modes in the Band 7. This should cover the use cases of most fitness band owners and will come in handy if you’re someone who has a diversified fitness routine. Some of the popular sports modes on Mi Band 7 include stretching, mixed aerobics, tennis, HIIT, aerobics, and kickboxing.

Xiaomi has also enhanced the blood oxygen monitoring feature on the Mi Band 7. You now get continuous blood oxygen saturation (SpO2) monitoring throughout the day with automatic blood oxygen detection every five minutes. You also get vibration alerts when your blood oxygen content goes low.

Speaking of exercise modes, it’s worth mentioning that the Mi Band 7 still uses assisted GPS. As a result, you will have to carry your smartphone around for tracking your workouts. We have been hearing about the in-built GPS on the Mi Band series for years at this point, but it has been skipped this year too.

While it’s nice to have a variety of sports modes, having data is of no use if you don’t take actionable steps to improve your fitness using the provided insights. To help you in the process, Xiaomi is introducing four sports data analysis modes. Through these modes, the fitness band will give you feedback regarding your progress in athletic ability, meaning if you’re exceeding the general limit in an activity, how long you should rest, and goal-oriented training suggestions.

Also, another major improvement this year is improved battery life. Unlike the 125mAh battery seen on the Mi Band 6, Xiaomi has packed a larger 180mAh battery on the Mi Band 7. The company promises 15 days of usage with the Band 7. To recall, that’s merely a day more than promised on the Mi Band 6. It’s possible that adding new features like continuous blood oxygen monitoring could’ve compensated for the battery size upgrades.

To round everything up, here’s a quick comparison between the specifications of the Mi Band 6 and Mi Band 7:

To answer the big question, should you upgrade to the Mi Band 7 from the Mi Band 6? It depends on your use cases. Much like the minor upgrades we saw last year in our Mi Band 6 vs Mi Band 5 comparison, Xiaomi has brought incremental improvements this time around as well. Despite rumors, it’s disappointing to see that Xiaomi has skipped built-in GPS support on the Mi Band 7.

If you are not someone who uses a lot of sports modes, the Mi Band 5 will serve you just fine. Alongside that, you will also miss out on a larger display with AOD, guidance based on sports data analysis, and better battery life. Having said that, Mi Band 7 is a solid upgrade for anyone who’s looking to upgrade from older versions of the Mi Band like the Mi Band 3 and 4.

As far as the price is concerned, the Mi Band 7 comes at a 20 yuan price bump for the non-NFC and NFC variants, resulting in CNY 249 (~Rs 2,900) and CNY 299 (~Rs 3,499) as the effective prices, respectively. In case you’re wondering about Mi Band 7’s India launch date, we could expect the company to bring the fitness tracker to the country sometime in late August or early September of 2022. So, are you planning to upgrade or purchase the Mi Band 7? Let us know in the comments.