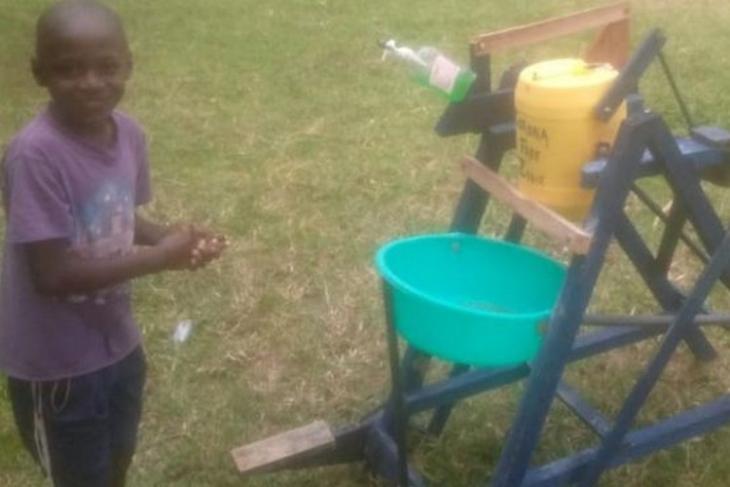 Since the Coronavirus started to take over the world, we have seen numerous innovative creations from people around the world to help curb the spread of the virus. We saw the “Coronaoven” by a Bengaluru-based startup and also saw a seventh-grader make a robotic sanitizer dispenser. Now, a 9-year-old from a village of Kenya has received the Presidential Award for his innovative wooden hand-washing machine.

Stephen Wamukota is a resident of the Mukwa village, in Bungoma County of Western Kenya. Although there are over 2000 cases of Coronavirus in the country, the virus has not reached the said village as of now. So, to keep it that way, Stephen has made a foot-operated hand-washing machine using his creative ideas.

The machine, which is entirely made out of wooden planks and sticks, dispenses water or hand sanitizer by tilting a container with the help of a foot-operated lever. There is a wooden lever at the bottom of the machine which connects to a water container. This lever at the bottom works with the help of springs that tilts the container when it is pressed. And once released, it goes back to the previous position.

This allows users to wash their hands without touching any of the components of the machine. They just need to press the lever with their feet.

The whole concept of the machine was Stephen’s. He used some pieces of wood which his father brought to make a window frame.

His father, James Wamukota said, “I had bought some pieces of wood to make a window frame, but when I came back home after work one day I found that Stephen had made the machine. The concept was his and I helped tighten the machine. I’m very proud.”.

For this invention, Stephen became one of the 68 Kenyans to receive the Presidential Order of Service, Uzalendo (Patriotic) Award. He said that he is “very happy” to receive the award. He also added that he wants to be an engineer when he grows up and according to his father, the County Governor has promised to give him a scholarship in the future.

This shows that you don’t need any high tech equipment to create something that makes a change. You just need the passion of making the change and this 9-year-old proved that. Way to go little man!