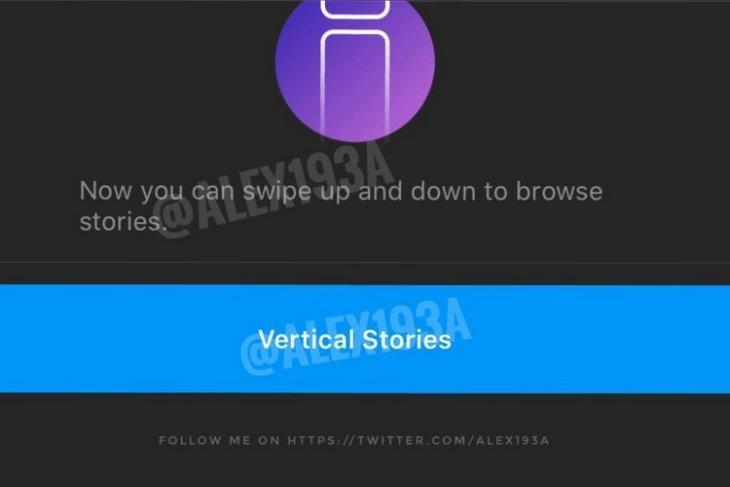 To make its platform more like the uber-popular TikTok, Instagram is developing a whole new way for users to swipe through stories. The feature dubbed “Vertical Stories” aims to help users browse through stories with vertical swipes instead of horizontal ones and taps. The company, after releasing the new “Recently Deleted” feature for its app, confirmed the development of the said feature.

Now, vertical swiping for consuming content was not that popular amongst users before TikTok came in. However, with the now-banned-in-India app gaining massive popularity amongst users, other companies started to copy its features.

So now, Instagram is developing “Vertical Stories” to provide users with a similar UI as TikTok while browsing through stories, as if Reels was not enough. It was spotted by Alessandro Paluzzi a few days earlier inside Instagram’s code and he shared a screenshot of the feature on Twitter.

#Instagram is working on Vertical Stories 👀
Swipe up and down to browse stories. pic.twitter.com/LDJje8l137

As you can see in the screenshot, the new feature states that “now you can swipe up and down to browse stories” on Instagram. There is also a new glyph for the feature and a big blue “Vertical Stories” button to start browsing stories through vertical swipes right away.

Paluzzi says that the feature is currently only available as an inside code and it is not yet live for any user in the world. However, he managed to get a screenshot of the same by digging up the feature from deep within Instagram’s core.

Following Paluzzi’s discovery, Techcrunch reached out to Instagram to comment on the story to which a spokesperson from the company confirmed that it is legit.

So, as you can guess, the Facebook-owned social media platform wants to give its users a TikTok-like feed for browsing stories. It is similar to how Reels work where you have to swipe up or down to browse through the short videos.

Now, as this is an early prototype, the feature is not yet live for users and there is a high chance that it may never make its way to the public. However, it is quite fascinating to see Instagram trying their heart out to be more like the massively popular video-sharing platform, TikTok.