Last December, Twitter released its live audio rooms feature ‘Spaces’ in private beta for iOS users. The company has since expanded the testing to some Android users. If you’re wondering what Twitter Spaces is all about or are curious to know if you should use the feature, you’ve come to the right place. In this article, we’ve covered everything you need to know to use Twitter Spaces, including how to create, join, and use the feature.

Twitter Spaces is a Clubhouse-like feature that lets you create or join live audio rooms on the platform. Since the feature is integrated into Twitter, creators don’t have to go through the hassle of building a new audience or following to engage with their Twitter followers.

Twitter is currently testing Spaces on both Android and iOS. Hence, the feature, especially the ability to create a Space, is not widely available just yet. The company also has plans to bring Twitter Spaces to the web version in the foreseeable future.

Twitter Spaces are public by default for now. As a result, anyone on Twitter can join your Space. You can, however, turn off the microphone and only allow others to join as listeners or keep the option open for them to decide. Although accounts with protected tweets can’t host a Space, they can join Spaces hosted by others. You can’t access a Space session once it ends. However, Twitter will retain copies of audio and captions for 30 days.

According to Twitter, a total of 11 people, including the host, can speak simultaneously in a Space. Moreover, there is no limit on the number of listeners, and you can have hundreds or thousands of your followers join in at the same time. Your followers will see an active Space session at the top of the timeline in the Fleets section.

1. To create a Space, tap on the ‘+’ floating button at the bottom right and choose ‘Spaces’ from the available options. 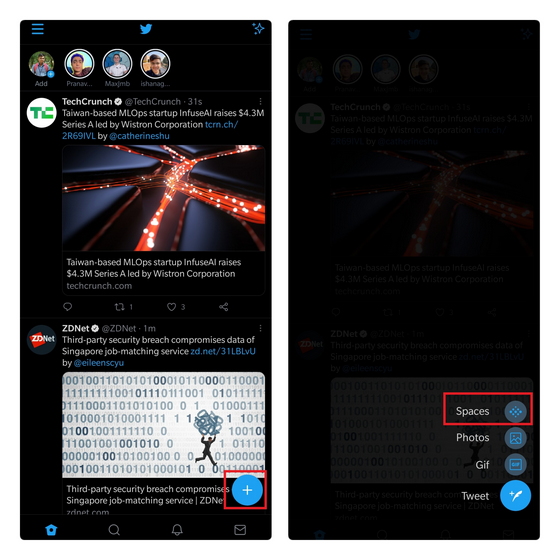 2. Twitter will now urge you to name the Space. Choose a name relevant to the discussion and tap on ‘Start your space’ to proceed further. 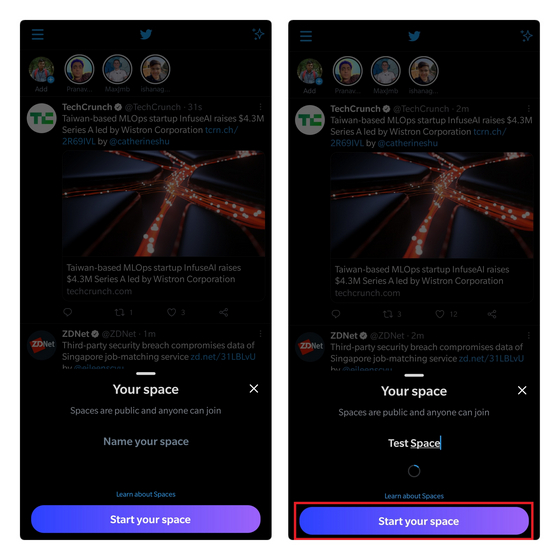 1. When you first create a Space, your mic will be turned off. To enable the mic, tap on the mic button present on the bottom left. 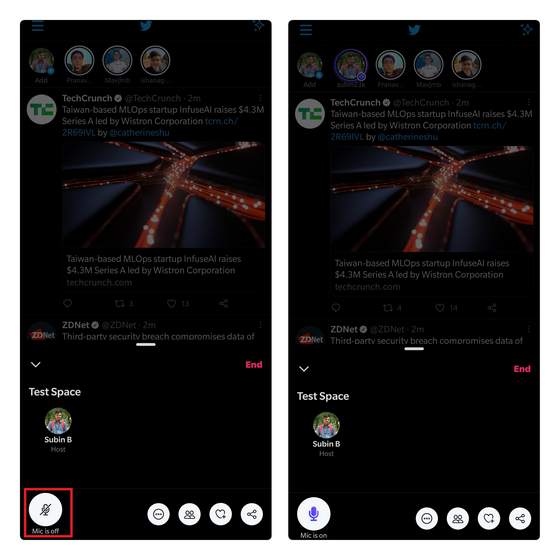 2. Tap on the horizontal three dots menu and choose ‘Adjust settings’ to enable or view captions. 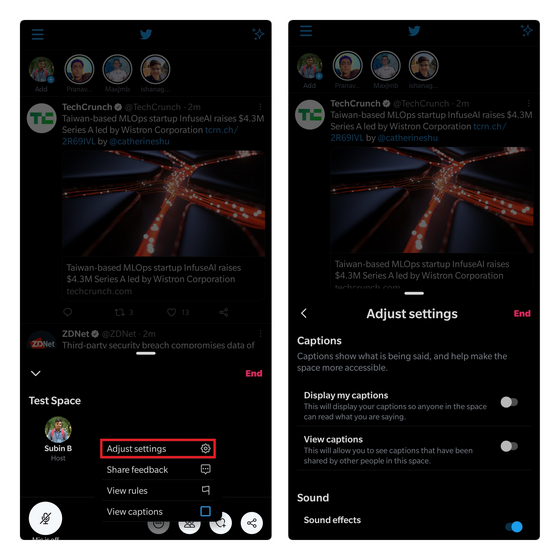 3. You can tap on the down arrow present above the Space heading to minimize the Space. This way, you can continue scrolling through your feed while listening to a Space session. It is also worth pointing out that you won’t get disconnected from a Space if you switch to a different app.

Invite Users to Your Space

1. You can invite people to your Space in three ways. You can send the invite through Twitter DMs, tweet the Space link, or copy the link to share it on other platforms. To do any of these, tap on the ‘Share’ button in the Space UI. 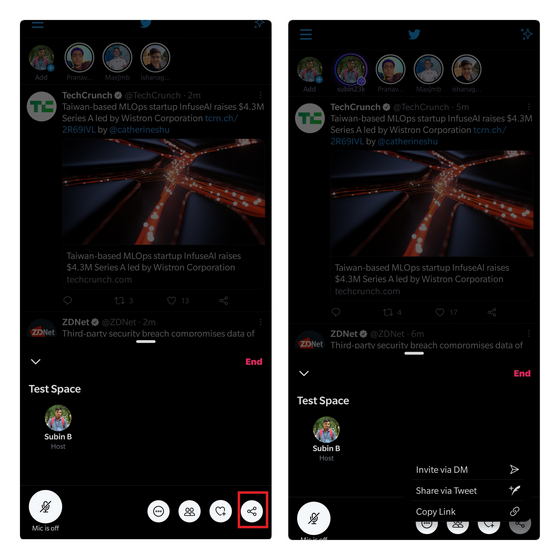 2. You can manage participants from the Guests section. From here, you can view speakers, listeners, and approve speak requests from listeners. 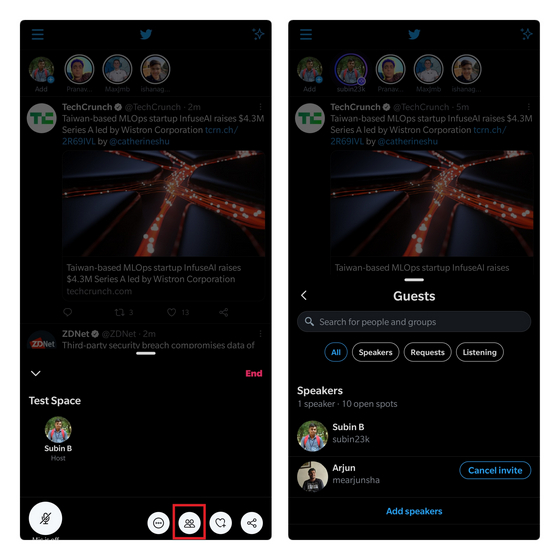 1. If you’re following the Space host, you’ll see a purple Space indicator at the top of your timeline. You can tap on it and hit ‘Join this space’ to join in. You have the option to join as a listener or speaker, but the host will have to approve your speak request before you can speak in the Space. 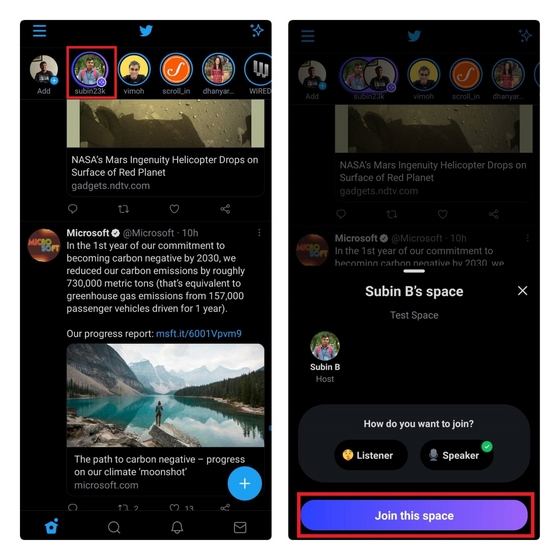 2. You can utilize emoji reactions to convey your emotions without having to speak in Twitter Spaces. To do so, tap on the emoji button (the heart with a plus icon) at the bottom right and pick one of the available emojis (no angry ? reacts, sadly.) All of the participants will see the emoji reaction on your Space avatar. 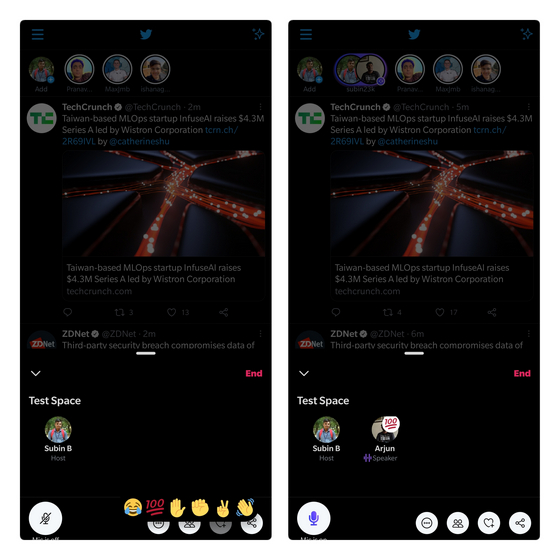 1. Once you’re ready to wind up the discussion, you can tap on the ‘End’ button to close the Spaces window. When the warning appears, tap on ‘Yes, End’ to confirm. 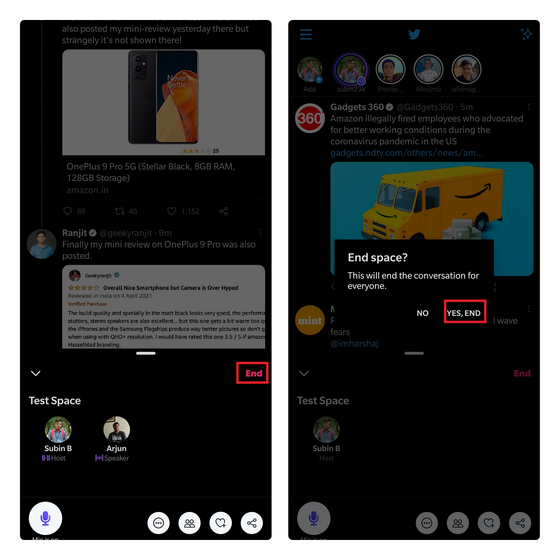 2. Listeners can easily exit Spaces at any time by tapping the ‘Leave’ button at the top right corner. Everyone will automatically be kicked from the Space once the host ends the discussion.

1. You can use Twitter’s search functionality to discover active Spaces. All you have to do is enter ‘twitter.com/i/spaces’ in the search bar. Use this link to see a list of ongoing Twitter Spaces. It goes without saying that you can only discover Spaces that are shared as a tweet through this method.

2. Another great resource for discovering active Spaces is an unofficial website called Twitterspaces.global. The website essentially lists the latest tweets with a Space link. Until Twitter eventually builds a dedicated section to help users discover new Spaces, you can use either of these methods to find active audio rooms.

Twitter Spaces is an efficient implementation of audio rooms, but it is far from the only one. Excluding Clubhouse, tech companies including Facebook, LinkedIn, Telegram, and Instagram have been working on adding the feature to their platforms, with the latest one being Discord’s stage channels. It will be interesting to see if users continue using audio rooms once the novelty wears off. Regardless of what the future holds for these Clubhouse-inspired audio rooms, try out Spaces and share your thoughts with us in the comments section below.