Snapchat is kind of a unique social media app that is anti-everything that social media stands for. You can’t save the messages, memories or photos and if you try to take a screenshot, Snapchat alerts the sender about your action. Basically, privacy is at the heart of Snapchat. However, some people want to preserve those memories to relive it later or for keeping important information saved. You get it, right? Anyway, if you want to take screenshots on Snapchat without notifying the sender then we have shared some unique ways to do it. We have explained methods for both Android and iOS devices. That being said, let’s begin.

Android has had this awesome trick where you could clear the cache and Snapchat would not be able to detect the screenshot. But alas, it no longer works. In that case, we bring you another ingenious way to take a screenshot on Snapchat without them knowing. We are going to harness the true prowess of Google Assistant to trick Snapchat. Here is how you can do it. Just summon “Ok Google” and say “Take a Screenshot”. After that, you can save the screenshot on Google Photos or share it with other apps. Snapchat won’t be able to detect the screenshot capture this way. 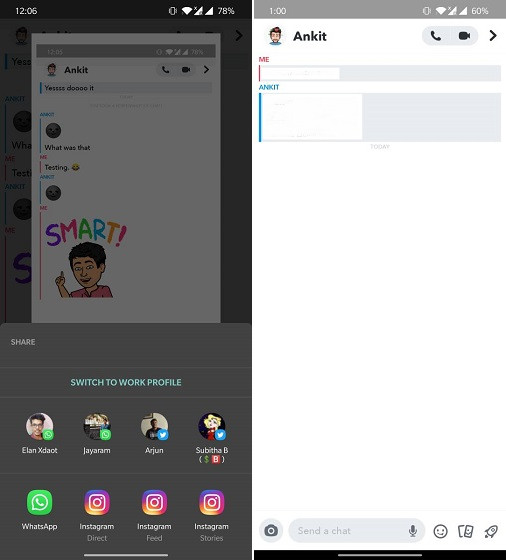 In addition, if you are using an LG smartphone, you can use the Capture+ feature on the navigation bar to take a screenshot on Snapchat. This feature does not notify anyone about the screenshot. You can enable it from Settings -> General tab -> Shortcut Keys. And if you are using a Samsung Galaxy Note device, just use the Smart Select feature with the S Pen. Similarly, you can use the knuckle gesture to take screenshot on Huawei and Honor devices and Snapchat won’t be able to recognize it. It works flawlessly.

Similar to Android, the “clear cache” method no longer works on iPhones. Both Apple and Snapchat always remain on toes to plug the gaps instantly and this time, they have fixed the most popular method to take screenshots on Snapchat. We did our testing on iPhone XR running iOS 13 and Snapchat was able to detect the screenshot instantly.

Another popular workaround has also been fixed by Apple. Now, if you connect your iPhone to the Mac (read some cool Mac tricks here) and start screen recording with QuickTime, Snapchat immediately prompts with “You screen recorded chat!”.

Now that we have exhausted all the methods, we are left with using a separate device to take photos of Snapchat conversations and memories. There is no DRM protection here, so you can take videos, photos, whatever you want! To sum it up, you can’t take a screenshot on Snapchat without notifying the sender on iOS, at least for now, without jail-breaking and tweaking hundred other things.

Take Screenshots on Snapchat Without Them Knowing

So that was our article on how to take a screenshot on Snapchat without letting anyone know. As we can see, on Android, it’s still somewhat possible using Google Assistant, but on iOS, you simply can’t take a screenshot on Snapchat. Apple is very serious about privacy and it shows in their product. Anyway, as and when we will find a new workaround that actually works on iPhones, we will let you know. In case, if you have any tricks up your sleeves which works flawlessly, do let us know in the comment section below.