While Twitter had rolled out the ‘multiple timelines’ feature on iOS way back in September last year, the Android version of Twitter has caught up just now. Similar to Reddit’s Custom Feed, now you can create multiple timelines on your Twitter home screen using Lists. If you don’t use Lists on Twitter then I would highly recommend that you take advantage of this feature. I have discussed Twitter Lists extensively below so go through that to have a better idea. Anyway, since the feature is live on both the platforms, let’s go ahead and learn how to create multiple timelines on Twitter for Android and iOS.

One of the best features of Twitter for me, other than the “Lights Out” black theme and Bookmark is Lists. With Twitter Lists, you can create custom timelines for your topics of interest. For instance, I have separate Lists for Technology, Politics, and Android where I have added tweeple based on their domain expertise. The best part about Twitter Lists is that they work exactly the same way as your default home screen timeline.

With the recent Twitter update on Android, now you can pin those lists directly on your Twitter home screen along with the main Timeline. This small design change has made Twitter Lists more accessible, reduced user friction, and improved the experience significantly. Since the main timeline is filled with all kinds of news and information — say, if you want to read about Technology at a particular time — you can just swipe left and move to the Tech timeline. Basically, multiple timelines on Twitter is a boon for users who follow a range of topics and people. So with all that said, let’s go ahead and learn how to create multiple timelines on the Twitter home screen.

Note: Here, I have demonstrated the steps on an Android smartphone, but the instructions are the same for iOS devices as well. Also, make sure to update the Twitter app to its latest version.

1. Tap on the “Profile” icon on the top-left corner and open “Lists”. Now, tap on the “plus” icon at the bottom to create a Twitter List, in case you have not created any list. 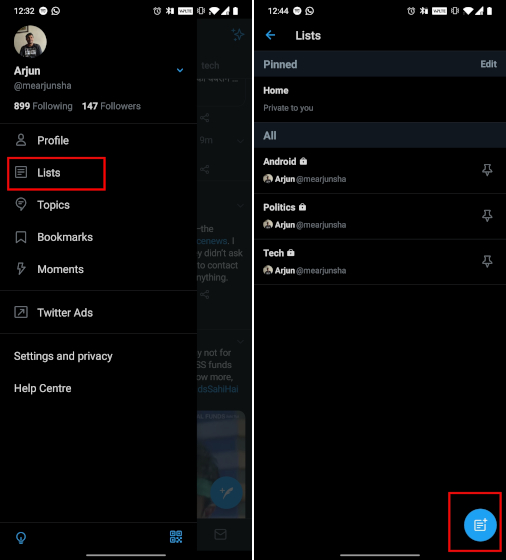 2. After you are done making a list, tap on the “Pin” icon to move the particular list to the home screen. You can further tap on “Edit” to change the order of the lists as well.

3. Finally, you will find multiple timelines on your Twitter home screen. You can just swipe left or right to move from one list to another. That’s an awesome new change and very convenient to use.

So that is how you can create Lists and set up multiple Timelines on your Twitter home screen. In my limited usage so far, it has worked really well and does not have any kind of delay in updating the feed with the latest tweets. However, we don’t have one feature that the main timeline has and that is the option to choose between Top Tweets and Tweets in chronological order. We hope Twitter slowly rolls out those features as well to the List section. Anyway, that is all from us. If you liked the article then do let us know in the comment section below.