Skip to content
Home News This Headless Robot Is a Real-Life Mr. Tumnus & Can Carry Heavy Boxes up the Stairs 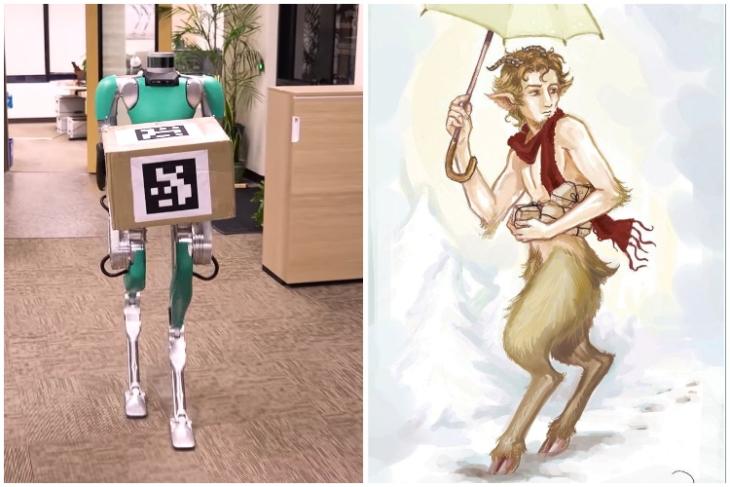 As our knowledge of robotics continues to grow, companies are working hard to build the perfect robotic assistant for humans. We’ve already seen Boston Dynamics’ now-commercial robotic dog, Spot, perform numerous tasks with an aim to assist humans in day-to-day activities. Now, another robotics company has built a humanoid robot to run errands in your office and carry big boxes from one point to another.

Dubbed as Digit, this head-less humanoid robot has been designed to help humans in factories and offices. It has a unique design that helps it to perform various tasks such as lifting heavy boxes and carrying them from point A to point B.

Now, if you take a look at the lower part of the robot, you will notice the unusual forward-bent-knees that the robot possesses. This form factor of its knees allows it to climb steep stairs with a heavy payload in its robotic arms. Moreover, unlike other robotic assistants, Digit can actually bend and lift boxes from the floor and then carry them around in a warehouse or an office space.

Developed by Agility Robotics, the company recently announced (below) a new $20 million funding round for the robot. DCVC and Playground Global are two of the VC companies that co-led the round. And as of now, Agility Robotics has raised $29 million for Digit in total.

We're excited to announce a $20M fundraise co-led by @DCVC and @Playground_VC. With Digit now in full production, we look forward to putting bipedal robots to work in dull, dirty, and dangerous spaces designed for humans. https://t.co/wBmKIrXnhv pic.twitter.com/yDAKRtERtf

“It’s never been clearer that our society’s demand for manual labor exceeds our ability to generate it safely, and it is far past time we have a solution which can work alongside humans to raise the bar on the quality of life and free up human time,” said the co-founder of Agility Robotics, Damion Shelton.

You can check out the official video about Digit right below to know more about the robot, that actually looks like a headless Mr. Tumnus from “Narnia: the Lion, the Witch, and the Wardrobe”.