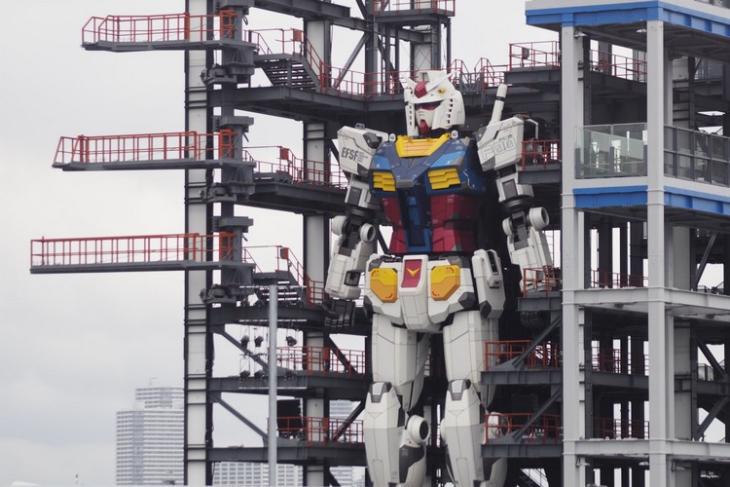 Back in 2018, we saw a Japanese engineer build a giant 8.5-meter-tall robot inspired by his favorite anime show, “Mobile Suit Gundam”. Now, Japan has another Gundam robot that is even bigger and taller than the previous model and it has started walking around now.

The “Giant Gundam Yokohama” robot, which has been a work-in-progress since back in January, is being made as a centerpiece for the Gundam Factory Yokohama. It’s essentially a tourist attraction that is made to celebrate the 40th anniversary of the popular anime series of Japan, “Mobile Suit Gundam”.

The theme park was set to open in October this year. However, due to the COVID-19 pandemic, the authorities moved the opening date to December 19.

Now, the 60-foot-robot stands tall over the port of Yokohama and has been termed as the world’s largest robot to date. The “Giant Gundam Yokohama” is based on the robot of the same name that featured in several manga comics and video games since 1979.

According to the report, the giant Gundam robot supports 24 degrees of freedom. This means that it can move its legs to walk, bend its knees to kneel, turn its head, and even move its fingers.

Now, since the start of its construction back in January, there has been a lot of setbacks in the development of this giant robot due to the ongoing pandemic. However, the team of workers continued to build the robot, and now, according to a video by a Twitter user, it seems like the “Giant Gundam Yokohama” is ready to wreak havoc in the country.

A Twitter user (@yoshi115t) recently shared a video (below) of the giant robot captured with his telephoto lens.

In the video, we can see that the robot moving its legs to come forward, kneel down on one knee, raise its hands with one finger pointing upwards, and then going back to its previous position. Fans of the anime series have been quite excited about seeing this robot in real life when the Gundam theme park opens up to the public later this year.