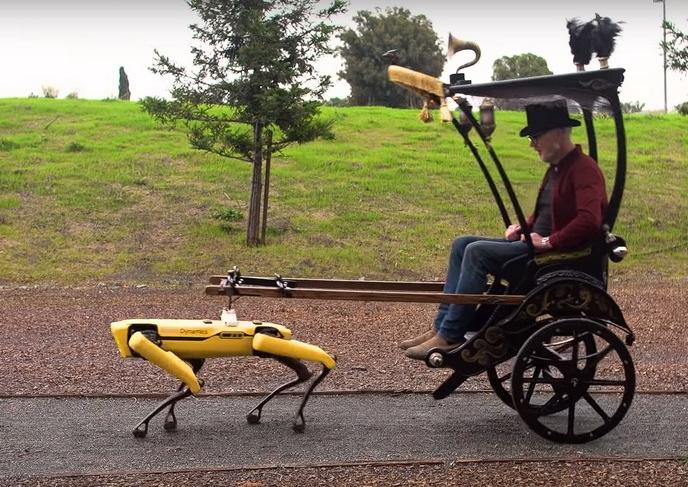 Hand-pulled rickshaws are one of the oldest modes of transportation, which is common in many countries including India, China, Thailand, and more. If you go to Kolkata, there are parts of the city where there are people still pulling these carriages with a passenger.

Adam Savage, the popular Mythbusters co-host, made a similar mode of personal transportation.

Savage got his hands on a Spot robotic dog made by Boston Dynamics last month. He plans to conduct numerous tests with the man-made dog over the course of this year. He posts videos of his tests on his YouTube channel, “Adam Savage’s Tested”.

In a recent video that was published on his channel, the man showed how he built a custom “rickshaw” for the Spot robot to pull. He said it took him five days to make a carriage out of a wheel-chair chassis. He started his video by saying how obsessed he is with Indian rickshaws. This idea drove him to build his own. To help him with the project, Savage invited the field applications head of Boston Dynamics, Seth Davis. Upon asking if the robot can pull the carriage, Davis said that they designed the Spot robot to carry different types of cargo. So, the robot has cargo rails attached to its back for end-users to connect any type of payload that fits the rails.

After this, Adam went on to make a tow-hitch for the robot to attach it to the carriage. The fun starts at the 23-minute mark when Savage hopped inside the carriage and made the robot dog pull it.

Although this is not any practical way to travel, it looked awesome watching a dog-like robot pull a rickshaw. It was as if the victorian era met with the 23rd century. The robot dog was able to carry the passenger with a carriage, however, the speed was of the transport was extremely slow. When it came to an uphill road, the Spot robot struggled quite a bit to pull the rickshaw.

So how do you like the idea of a robot-dog taking you to the market? Let us know down in the comments.