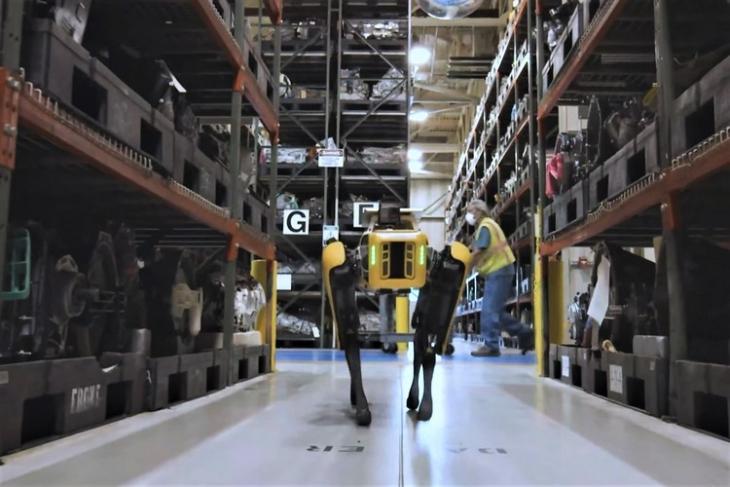 If you’ve been around the internet for some time, then you probably know about Boston Dynamics’ creepy yet cute robotic dog, “Spot”. We have seen this robot dog open doors, help frontliners to combat COVID-19, and even pull a “rickshaw”. Now, car-manufacturers, Ford has deployed these robots to map their manufacturing facility.

According to a recent statement by Ford, the company is using Boston Dynamics’ two “Spot” robots to scan and map its Van Dyke facility in Michigan in 3D. This has been possible as Boston Dynamics quite recently made the robot dogs available for the market.

Now, the two four-legged almost-dogs — Fluffy and Spot, will be roaming around the plant, each with a remote operator, taking a 3D scan of the facility through its four-camera system and an array of sensors. These 3D maps will then go to Ford engineers to help them plan upgrades or change layouts of the plant. Ford says that with these 3D maps, engineers can create and build optimal plant layouts to increase yield and speed up the manufacturing process.

“We design and build the plant. After that, over the years, changes are made that rarely get documented,” said Ford’s Digital Engineering Manager, Mark Goderis.

Now, the company says that these kinds of tasks take at least two weeks of time if they use human labor. However, with Fluffy and Spot, “we are able to do it in half the time.”, added Goderis.

Apart from saving precious time, the two dogs could also help Ford to save a lot of cash. Currently, as per the company, Ford spends around $300,000 to scan and make a 3D map of a facility. However, the company predicts that if these robots work well, they could scan all their facilities in a quarter of that huge amount.

You can check out the Fluffy happily roaming around the facility with its handler in the YouTube video right below.